The advocates of “austerity now!” are talking about Sweden.

When Europe’s finance ministers meet for a group photo, it’s easy to spot the rebel — Anders Borg has a ponytail and earring. What actually marks him out, though, is how he responded to the crash. While most countries in Europe borrowed massively, Borg did not. Since becoming Sweden’s finance minister, his mission has been to pare back government. His ‘stimulus’ was a permanent tax cut. To critics, this was fiscal lunacy — the so-called ‘punk tax cutting’ agenda. Borg, on the other hand, thought lunacy meant repeating the economics of the 1970s and expecting a different result.

Three years on, it’s pretty clear who was right. ‘Look at Spain, Portugal or the UK, whose governments were arguing for large temporary stimulus,’ he says. ‘Well, we can see that very little of the stimulus went to the economy. But they are stuck with the debt.’ Tax-cutting Sweden, by contrast, had the fastest growth in Europe last year, when it also celebrated the abolition of its deficit. The recovery started just in time for the 2010 Swedish election, in which the Conservatives were re-elected for the first time in history.

So, how is the Swedish economy doing?

Well, the good thing about assessing the Swedish economy is that Sweden remains monetarily sovereign, meaning that its economy is not dependent upon the monetary policy of a foreign agency like the ECB. This means that it can be fairly assessed side-by-side with other Western monetary sovereigns like Britain, America and Japan.

The thing that austerians are so excited about is that Sweden currently has low debt and is running balanced budgets:

But that hasn’t meant that unemployment has been low. In fact, right now it’s worse than American, British and Japanese unemployment:

And while Sweden’s low debt and balanced budgets may have resulted in low rates, its rates are not significantly lower than Britain and America, and are higher than Japan who carry the highest debt load of all:

But to be fair real GDP growth in Sweden since the crisis has been relatively decent — although notably still below its pre-2008 trend — beating the other three countries who all performed poorly: 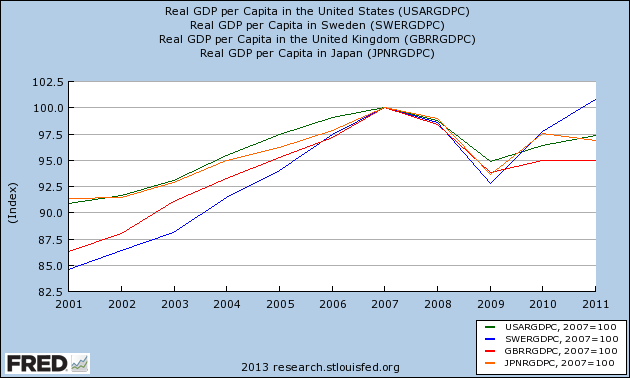 In my view, Sweden’s focus on bringing down deficits in the years from 2004 until the crisis in 2008 was very responsible and prudent. Sweden had no wasteful expansionary spending in the mid 2000s on things like occupying Iraq. It was not enacting expensive legislation like No Child Left Behind, Medicare D and unfunded tax cuts that bloated government budgets.

Coming into the crisis with a low debt-to-GDP ratio is very healthy because it gives the government additional fiscal space to cut taxes, and spend money on infrastructure, public goods and tax rebates to bring down the unemployment rate, which is the one aspect of the Swedish macroeconomy with significant room for improvement. An unemployment rate approaching 9% is undeniably unhealthy, and it is disappointing that the Swedish treasury with so much wiggle room is not doing more to assist the private sector in bringing down unemployment. And even though Sweden has had more growth than other Western countries, it has still not caught up with its pre-2008 growth trend.

Sweden’s unemployment woe illustrates that Sweden is not a paradigm of the supposed virtues of austerity in all seasons. Austerity in the slump just frees up resources while the economy is already suffering from a high degree of slack in resources — capital (high savings, low interest rates) and labour (high unemployment). Sweden illustrates this just as much as other Western nations.

32 thoughts on “The New Swedish Model?”