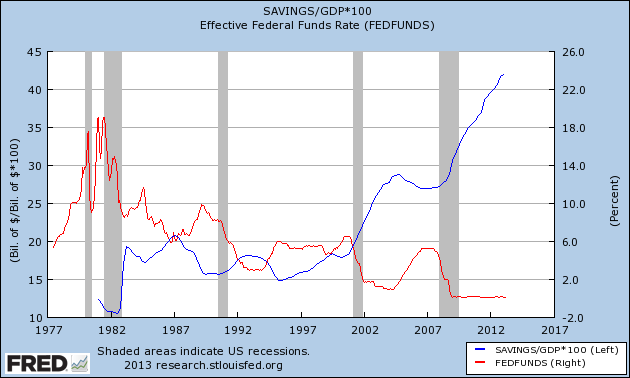 The actual cause of the desire to save rather than consume or invest is uncertain. Perhaps this is a demographic trend — with more people closing in on the retirement age, they seek to save more of their income for retirement. Perhaps it is a psychological trend — fear of investment in stock markets and bond markets, due to fear of corruption, or market crashes or a general distrust of corporations. Perhaps it is a shortage of “safe” assets — by engaging in quantitative easing, central banks are removing assets from markets and replacing them with base money, and deleveraging corporations are paying down rather than issuing new debt. Perhaps it is anticipation of deflation — people expecting that saved money will increase its purchasing power in future. Perhaps it is a combination of all these things and more. But whatever it is, we know that there is an extraordinary savings glut.

There have been a lot of assertions that interest rates at present are unnaturally or artificially low. Well, what can we expect in the context of such a glut of savings? Higher interest rates? Based on what?

There was a clear negative association between savings and interest rates up until interest rates fell to zero, while the savings rate continued to soar. Theoretically, lower interest rates ceteris paribus should inhibit the desire to save, by lowering the reward for doing so. But interest rates cannot fall below zero at least not within our current monetary system — there exist some theoretical proposals to break the zero bound using negative nominal interest rates, but these remain untested and controversial. Even tripling the monetary base — an act that Bernanke at least believes simulates an interest rate cut at the zero bound — has not discouraged the saving of greater and greater levels of the national income.

In the long run, the desire to save increasingly massive percentages of the national income will cool down. Sooner or later some externality will jolt the idle resources in the economy into action. But that is the long run. In the short run saving keeps soaring. Investors are not finding better investment opportunities for their savings and the structure of production does not appear to be adjusting very fast to open up new opportunities for all of that idle cash.

57 thoughts on “A Visual Representation of the Zero Bound”