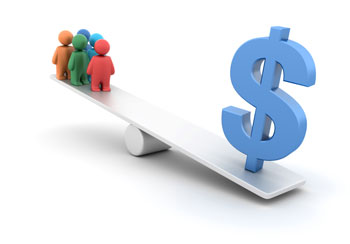 I have written at length in the past about Britain’s unequal recovery — how the vast majority of the gains from quantitative easing having gone to the top 5% of households.

It seems as if the same is true in America. The big gains have accrued mostly to the wealthy. Little is trickling down.

Bloomberg recently reported that the top 1% has taken 93% of income growth as the rich-poor gap has widened:

The earnings gap between rich and poor Americans was the widest in more than four decades in 2011, Census data show, surpassing income inequality previously reported in Uganda and Kazakhstan. The notion that each generation does better than the last — one aspect of the American Dream — has been challenged by evidence that average family incomes fell last decade for the first time since World War II.

A recent Pew study on inequality had similar findings:

The U.S. economy has recovered for households with net worth of $500,000 or more, a new study shows. The recession continues for almost everyone else.

Wealthy households boosted their net worth by 21.2 percent in the aftermath of the recession, according to the study released today by the Pew Research Center. The rest of America lost 4.9 percent of household wealth from 2009 to 2011.

And Evan Soltas notes that if stock markets had recovered at the same speed as unemployment, the Dow Jones Industrial Average would be around 8,000 rather than above 15,000.

One goal, of course, of the Federal Reserve since the quantitative easing programs began was to reinflate stock markets through a transmission mechanism of bond purchases. 38% of the value of the stock markets is estimated to be held by the top 1%. So central bankers engaging in asset purchases have been pursuing policies with goals that implicitly favour the wealthiest.

More recently, the Fed has targeted the unemployment rate more explicitly, pledging while inflation stays low to buy bonds until unemployment falls. The theoretical justification for this is Okun’s Law, but empirical evidence from the United Kingdom shows that asset purchases in the context of austerity — the so-called “expansionary austerity” championed by policy advocates including David Beckworth and Ramesh Ponnuru — has not managed to lower unemployment.

As I noted last month, “expansionary austerity” as a means to tackle unemployment and deficits in depressionary conditions is being discredited by the UK experience:

First, since expansionary austerity policies began, real growth has been tepid and real GDP remains far below its 2007 peak. Second, unemployment remains high and is now higher than it is in the United States. Third, while stock markets have soared, the Bank of England calculates that the overwhelming majority of gains have gone to the top 5% of households, exacerbating wealth inequality. Fourth, budget deficits remain persistently high even in spite of per capita spending reductions.

Policymakers on both sides of the Atlantic urgently need to look for policies that do not exacerbate income and wealth inequality. This not only means reconsidering the fiscal and monetary balance — it seems to be true that the time for austerity at the Treasury is the boom, not the slump —  it also means that monetary policy needs a new transmission mechanism that does not implicitly favour the wealthiest.