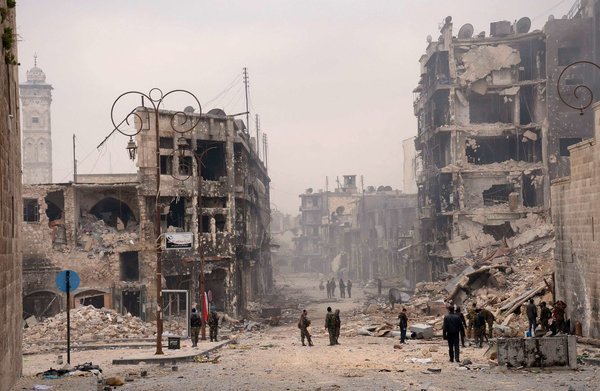 Times of global economic disruption or depression have often historically been preludes to war. So too have been periods of geopolitical instability, where new economic powers are rising, and old ones falling. Back in 2008 the United States’ tenture as the sole global superpower appeared to be endangered, and we appeared to be on the cusp of a new multipolar world order.  And at the same time a new demand-side depression bearing some eerily similar characteristics to the Great Depression surfaced. So — even though we were sitting on the back of a huge trend of decreasing war and violence — I was to a small degree worried that this slump might be a prelude to another global conflict.

Luckily — with the exception of a few skirmishes in the middle east following the Arab spring — no such wide-scale global conflict has broken out. The forces of peace have kept the forces of war and chaos mostly at bay. No direct war between the great powers has broken out. Given the high level of trade interdependency and global economic integration that now exists — factors which play a great role in discouraging conflict — that is very good news. Avoiding a new global conflict should be a top priority for policymakers, corporations, and individuals worldwide.

Hopefully, then, the latest friction in the middle east — this time between Israel and Russia — will amount to nothing:

Israel’s defense chief said Tuesday a Russian plan to supply sophisticated anti-aircraft missiles to Syriawas a “threat” and signaled that Israel is prepared to use force to stop the delivery.

The warning by Defense Minister Moshe Yaalon ratcheted up tensions with Moscow over the planned sale of S-300 air-defense missiles to Syria. Earlier in the day, a top Russian official said his government remained committed to the deal.

Israel has been lobbying Moscow to halt the sale, fearing the missiles would upset the balance of power in the region and could slip into the hands of hostile groups, including the Lebanese militia Hezbollah, a close ally of the Syrian regime.

Israel has carried out several airstrikes in Syria in recent months that are believed to have destroyed weapons shipments bound for Hezbollah. Israel has not confirmed carrying out the attacks.

The delivery of the Russian missiles to Syria could limit the Israeli air force’s ability to act. It is not clear whether Israeli warplanes entered Syrian airspace in these attacks.

Attacking Syrian bases and weaponry is one thing. Attacking Russian attempts to aid the Syrian government is quite another — and could very easily have dark consequences. Perhaps Russian interests in Syria — including their naval base there — are a lost cause. Perhaps Russian attempts to help the Syrian government are misguided. And perhaps Western attempts to aid the Syrian rebels — who  have some have affiliations with al-Qaeda and radical Islamism, and who have reportedly used chemical weapons — overthrow Assad are even more misguided and even more dangerous. Neither side can really claim the moral high ground in what is effectively a proxy war between the Russian-backed government and Western-backed rebels. Both sides have committed atrocities and killed civilians and journalists. All that has been achieved is massive disruption to millions of ordinary Syrians who have had to flee the country.

Ideally, a peace based around compromise, power-sharing  and democracy can be brokered by the UN Security Council to avoid any further escalation. But unfortunately, both the Russians and the West are continuing to provide material support to their favoured sides. That has been bad for the Syrian people, whose country lies ruined and abandoned and while they now populate refugee camps in Jordan, Lebanon, Turkey and Egypt. But it could even worse for the region and the world with further escalation.

Hopefully, there will be no escalation. Hopefully, the Syrian Civil War will wind down to a stalemate, peace terms will be brokered and the refugees will be able to go home. Hopefully the great powers who have so far allowed this proxy war to continue will realise that fighting a proxy war in Syria is a very dangerous thing. The likeliest outcome is that the forces of inertia, peace and economic development will triumph over the forces of chaos. But this is not assured so long as this dangerous proxy war goes on.

22 thoughts on “Israel and Russia At Odds Over Syria”