Since talk of the taper started, interest rates have been gradually rising. When Bernanke talked about the possibility of tapering QE in mid 2014 so long as growth and unemployment remain on track, rates leapt to their highest level since 2011:

A simple supply-demand analysis of Treasuries says that if the Fed buys less, ceteris paribus the price will fall and rates will rise. The Fed is implying it will buy less, and lo and behold markets are selling off on expectations that future demand will be lower. The analysis of those who say that quantitative easing is raising interest rates seems increasingly dubious to me.

The alternative analysis is that rates are rising on sentiment that the economy is improving. I wouldn’t rule that out, but the trouble is that the economy is still deeply depressed. GDP is still far below its pre-crisis trend. Broad monetary aggregates are still massively deflated. Lots and lots of working-age people who were working before 2008 still haven’t returned to the labour force: 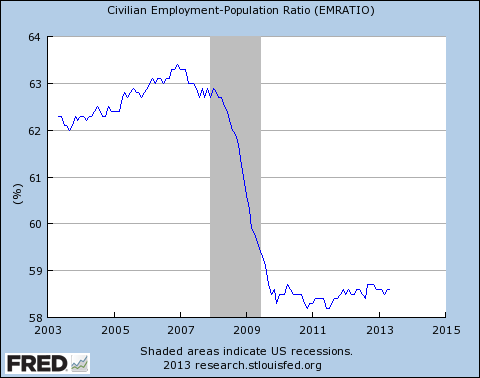 So while equities have returned to their pre-crisis heights — unsurprisingly, after all the financial sector is the Fed’s monetary transmission mechanism — the real economy, broadly speaking, hasn’t.

So it’s surprising to me that there is any talk of tapering. Headline unemployment is still 7.5%, and core inflation is just 1%, 1% below the Federal Reserve’s self-imposed target. Bernanke referred to disinflationary and deflationary forces in the economy as “transitory”, but any such diagnosis would seem to be the height of naïveté. The deflation of the shadow money supply and broad monetary aggregates is an ongoing structural transformation in the post-shadow-banking-bubble world. There is nothing “transitory” about it. If inflation was 3% or 4% and unemployment was below 6%, then talk of a taper would be expectable. Right now it just makes it seem like the Fed doesn’t have a clear framework. If QE3 was supposed to target unemployment, why is the Fed considering tapering when unemployment is still so high? Yes, the Fed’s internal DSGE models are saying that unemployment will continue to fall. Of course they do — these models have assumptions of clearing labour markets built into them! But right now inflation is below-mandate and unemployment is above mandate. Assuming away current conditions with the term “transitory” is basically saying that when the storm is long past the ocean is flat again.

Of course, at the zero-bound I think the Fed’s transmission mechanisms are relatively powerless in terms of any ability to stimulate employment or growth. It has taken the horse to water, but the horse hasn’t drunk. What the Fed can control with balance sheet monetary policy is interest rates on assets it buys. By shrugging, the Fed is signalling for a rise in government borrowing costs. That may be extremely premature.

13 thoughts on “The Fed Shrugs”