Paul Krugman says that we may have reached a “depressed equilibrium” that unemployment may remain elevated for a long, long time to come:

We had what felt like an epic intellectual debate over austerity economics, which ended, insofar as such debates ever end, with a stunning victory for the anti-austerity side — and hardly anything changed in the real world. Meanwhile, the pain caucus has found a new target, inventing dubious reasons for monetary tightening. And mass unemployment goes on.

So how does this end? Here’s a depressing thought: maybe it doesn’t.

True, something could come along — a new technology that induces lots of investment, a war, or maybe just a sufficient accumulation of “use, decay, and obsolescence”, as Keynes put it. But at this point I have real doubts about whether there will be events that force policy action.

First of all, I think many of us used to believe that sustained high unemployment would lead to substantial, perhaps accelerating deflation — and that this would push policymakers into doing something forceful. It’s now clear, however, that the relationship between inflation and unemployment flattens out at low inflation rates.

Last week, I wrote a piece arguing much the same thing:

It is also possible that we have reached what John Maynard Keynes called a “depressed equilibrium” where capital continues to be hoarded and not used to raise employment levels back to the pre-crash norm, and grow the economy out of the slump. With a private sector awash in debt and refusing to take on more to act as a source of growth, the only other agency with the ability to borrow and spend the economy back to growth is the government.

As the rate of technological growth accelerates, the chances of a technology shock that greatly increases investment seems to rise. New technologies coming onto the market in the coming years — lower-cost photovoltaic solar, 3-D printing, synthetic fossil fuels and more exotic things like asteroid mining — have a lot of potential to create a lot of demand. Yet, just as advanced manufacturing technologies have done in the past, they may end up destroying more jobs than they create. This could further accelerate the big post-2008 redistribution trend — falling wage and salary incomes and rising corporate profits as a percentage of GDP: 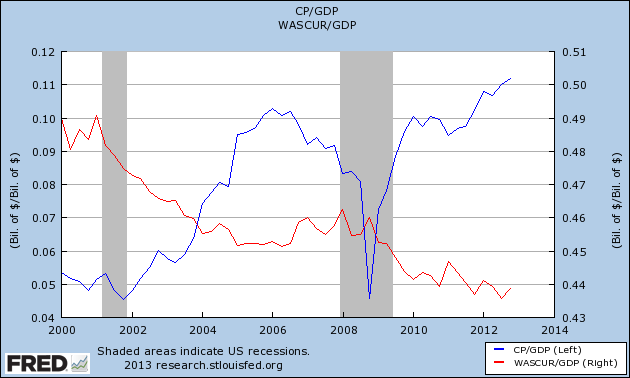 This general trend toward the obsolescence of labour is worrying. With less and less demand for labour in the economy due to things like robots, computerisation and job migration we could see more and more people sitting around doing nothing and collecting unemployment cheques. Perhaps this is the accidental fulfilment of the leisure society that Keynes envisaged. As humanity has gotten better at fulfilling our material needs, it takes less labour to do so. The unemployed are caught between a rock and a hard place; social and governmental expectations that able-bodied people should work, up against the economic reality that the demand for labour just doesn’t exist.

Without a technology shock or other exogenous shock, there may be another route out of the depressed equilibrium, and mass unemployment. I am not entirely convinced by Krugman’s argument that high unemployment won’t produce systemic price deflation. With core inflation at its lowest point in history in the United States and falling it does appear possible that the deflationary trend is beginning to accelerate even as headline unemployment gradually creeps down. This has after all been the norm in Japan for the last twenty years. With accelerating deflation, it seems much likelier that we will see both monetary and fiscal policy throwing money at lowering unemployment. But in the long run, if the trend toward the obsolescence of labour continues, this may only buy some temporary respite for the unemployed. In the long run, individuals, governments and society may have to adjust attitudes toward work and employment and adapt to a new normal encompassing less work, and more leisure.