The British government would like us to believe that the British economy is finally recovering after a quarter of 0.6% real GDP growth, which if sustained over a full year would equate to 2.4% annualised real GDP growth.

Today’s economic growth figures are encouraging. We are on the right track – building an economy for hardworking people.

To accept this argument, one would have to make oneself entirely ignorant of the facts of the current economic situation. Here’s the British economy’s post-2008 real GDP growth, compared to the United States which has also experienced a relatively lukewarm, disappointing recovery:

We are still far below the 2008 peak. Even the United States has done better. Only Europe — which has adopted even greater fiscal austerity than Britain since the slump — has done worse.

On unemployment, we’re doing even worse. Since the slump, unemployment hasn’t even begun to come down: 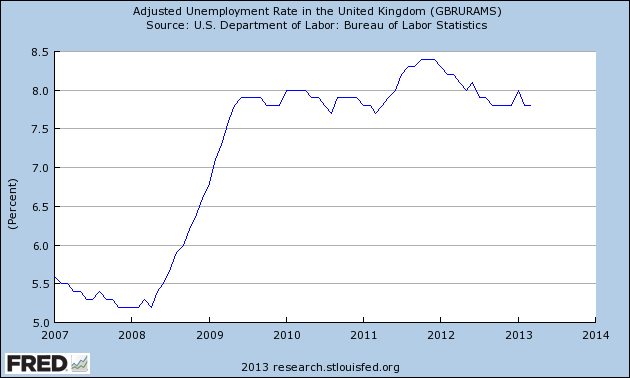 The truth is that the British economy is in a depression, very similar to the one experienced in the 1930s — what Keynes called a “depressed equilibrium”. The government now — as then — is not taking the malaise seriously, and would prefer to spew meaningless slogans about “building an economy for hardworking people” instead of focusing on job creation, which is the only viable short-term route out of the slump.

44 thoughts on “Is the British Economy Finally Recovering?”