Paul Krugman says that the notion that the weak economy is due to policy uncertainty has been thoroughly debunked. The Stanford/Chicago uncertainty index has considerably fallen: 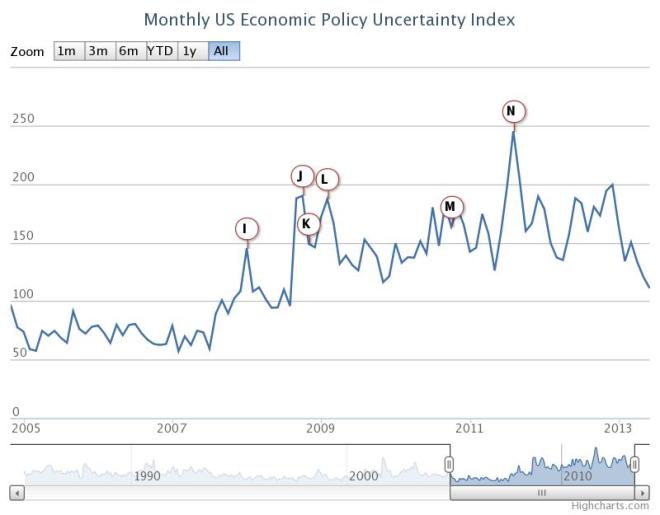 Without any considerable boost to job growth: 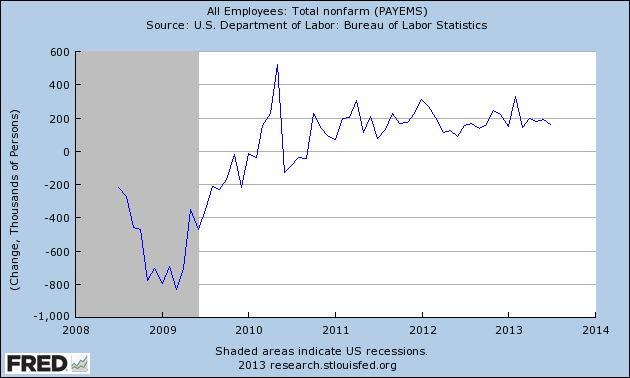 While policy uncertainty is concerned with policy in general, and not executive policy in particular, Krugman’s analysis is that “policy uncertainty” is a thinly-veiled attempt to blame Obama for the sluggishness of the recovery:

One of the remarkable things about the ongoing economic crisis is the endless search for explanations of something that’s actually quite simple — the sluggish pace of recovery. You have a large overhang of private debt; you have a still-depressed housing sector; and you have contractionary fiscal policy. Add to this the well-established fact that recovery tends to be slow after recessions caused not by tight money but by private-sector overreach, and there’s just no mystery that needs explaining.

Yet we’ve seen an endless series of analyses declaring that there is indeed a deep mystery, and it must be Obama’s Fault. Probably the most influential of these analyses was the claim that Obama was creating “uncertainty”, and this was holding everything back.

This crude notion of policy uncertainty is often attached to the notion of the Confidence Fairy; the idea that by running large deficits, government is crowding out private investment due to fears of future tax increases. The corollary of the Confidence Fairy view is that the only way to bring back private investment is to have large-scale austerity, to solidify expectations of lower future taxes. This view has been the basis for David Cameron’s economic policy in the UK, which can only be soberly judged as a large-scale failure.

Krugman is right to trash the Confidence Fairy — austerity at this point in the business cycle is a catastrophic error, because it sucks money out of the real economy. And he’s also right to trash those who view the sluggishness of the recovery as solely Obama’s fault. But he’s wrong, I think, to throw policy uncertainty out of the window entirely as a proximate cause of some of the problem’s we’re now facing.

Broadly, policy uncertainty goes both ways. That is simply because not all entrepreneurs in the private sector are looking for or worrying about tax cuts. People are heterogeneous. While there are some entrepreneurs worried about the future trajectory of taxes, many other entrepreneurs may be hoping for fiscal stimulus either because they would expect to receive orders from the government (for example, construction firms, defence contractors, universities, energy companies) or because they would be hoping that with stimulus, more people would have money in their pockets and they would be spending it.

While this, of course, cannot explain the crisis itself, nor the long and slow deleveraging since, having a deadlocked Congress erring on the side of austerity could be a major headache for many private enterprises. The fact that the more severe austerity experienced in Europe and Britain has actually led to bigger budget deficits there could result in even deeper and greater uncertainty for businesses. Put more simply, many businessmen could be reading Paul Krugman and others like him, agreeing with their interpretations, and worrying about the confused and deadlocked approach that the Federal government has taken to the post-2007 economy, and the dangers of austerity. This could contribute to the uptick in policy uncertainty measured by the Stanford/Chicago Index experienced since 2007 just as much as Wall Street Journal-reading Republicans worrying about the Confidence Fairy and taxes.