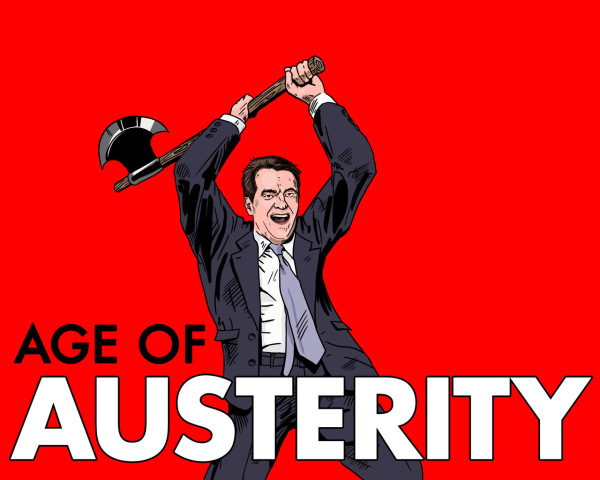 George Osborne spouts some nonsense about some so-called economic recovery:

The UK economy is “turning a corner”, Chancellor George Osborne has said in a speech in London.

Mr Osborne cited “tentative signs of a balanced, broad based and sustainable recovery”, but stressed it was still the “early stages” and “plenty of risks” remained.

Mr Osborne said that recent months – which have seen more upbeat reports on the economy – had “decisively ended” questions about his economic policy.

At this point, I have absolutely no idea what he is talking about. He appears to be inhabiting a parallel universe, one entirely separated from the reality which has seen sustained unemployment about 8% for the last 5 years — that’s 2.51 million people out of work who are looking for work — and a slump worse than the one Britain experienced in the Great Depression: 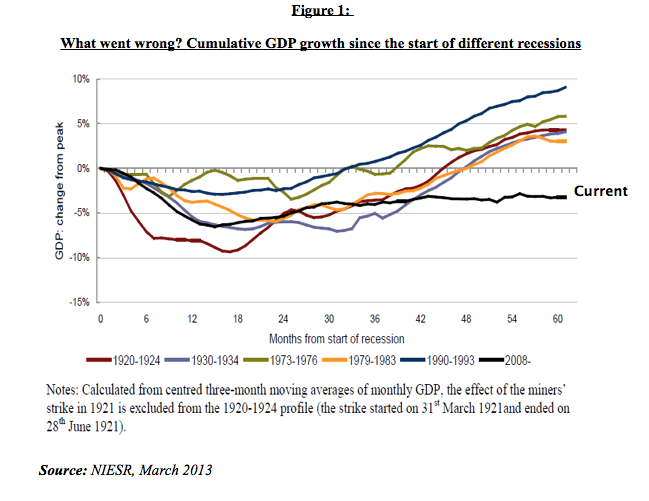 A tiny uptick after a huge and long depression is barely anything to celebrate. It is a probabilistic certainty that after falling off a cliff and lying prone on the ground awhile, things will one day sooner or later tick upward. Five years later is much later than sooner, and we’re not even back to the level of activity that existed in 2008. It could be eight or ten years at current growth levels after the initial events of 2008 that we make it back to that level of activity. And there is no sign that unemployment will begin coming down any time soon. In the long run, the sea will once again be calm and flat but no-one knows how long away the long run will be.

You cannot cut your way to growth. You do not stimulate growth by taking money and economic activity out of the economy. That is the manner in which you instigate depression. Supplies of capital and labour are both extremely slack — this is illustrated by the extremely low level of interest rates, and the high level of unemployment. Eventually the excesses of capital and labour will be used up, and the economy will return to full-employment and growth. But eventually could be a very long time. Waiting around when capital is available at the lowest interest rates in history and while unemployment continues to number in the millions is extremely dangerous and fragilising. Maybe the uptick will continue, and we will return to 2008 levels of activity by 2016 or 2018. Yet we would still have had a lost decade, one that probably could have been avoided had we not embarked on austerity in the wrong place at the wrong time. And it is possible that things may get worse, not better.

If I had been the politician who presided over this disaster, I would have resigned and hid myself away behind a rock. And it’s not just Osborne’s failure. The British media and other political parties have mostly failed to hold Osborne’s disastrous austerity policies to account. The fact that this depression has been a greater slump than the Great Depression is not the talking point that it ought to be. Perhaps that is because all the major political parties bear some responsibility, as Labour oversaw the start of the slump from 2008 to 2010, and the Liberal Democrats and Conservatives have overseen the continuation of the slump from 2010 to 2013. Whatever the reason, it is dreadful, and individuals from all sections of society continue to suffer for this disastrous mismanagement.