This, I would argue, is one of the scariest charts in the world today. The green line is output per hour worked, and the dotted green line is the pre-crisis trend: 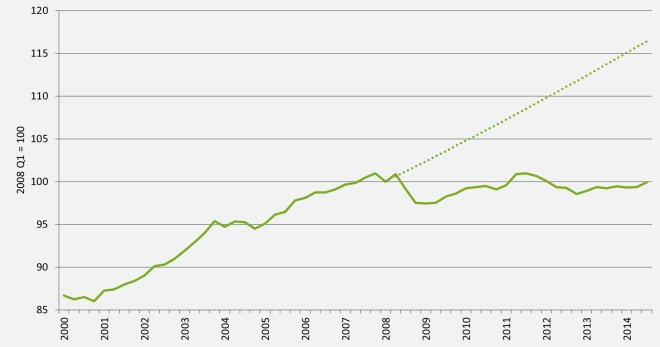 It’s what the Bank of England calls the “UK productivity puzzle.” As the BBC’s Linda Yueh notes: “output per hour is around 16 percentage points lower than it should be if productivity had grown at its pre-crisis pace.”

I don’t think it should be called a “productivity puzzle”. That would imply that we don’t really understand the phenomenon. That the phenomenon is a puzzle. But it’s really a simple phenomenon. The phenomenon is that people are producing less output per hour than they were before the financial crisis. Work is getting done. But the quality of the work is not improving.

The Bank of England points to “reduced investment in both physical and intangible capital, such as innovation, and impaired resource allocation from low to high productive uses” as a cause. In other words, the work is crap because firms aren’t deploying the resources to do good work. And this is a trend that predates the election of the Coalition government in 2010. As the Bank of England notes, the UK has lagged in investment as a percentage of GDP behind its fellow G8 economies since even the 1990s.

But things got really bad under the Coalition. And that shouldn’t really be news. There was a recession resulting from the financial crisis. The recession — as recessions tend to do — resulted in a severe drop in business investment. In the wake of the recession, what did the newly elected government decide to do? It decided to enact sweeping austerity programs — to slash investment even more.

So the story is that the government decided to compound the after-effects of the financial crisis with an austerity program. That means depriving the economy of even more resources needed for productivity, growth and prosperity. And — in truly, truly shocking news — UK investment as a percentage of GDP is currently lagging at a pathetic 15 percent of GDP behind Belgium, Gambia, Jordan, Equatorial Guinea and Costa Rica, and barely ahead of Greece!

The austerian view, of course, is that the austerity was necessary because otherwise the bond vigilantes would have sold UK public debt, and we would have turned into Greece, or something.

The so-called “productivity puzzle” and the related low-investment puzzle categorically proves this claim wrong. If the austerity was imbuing the market with confidence necessary for growth, we would expect to see productivity and investment rising.

That has not been the case. What has occurred is a zombie recovery caused by zombified economic policies. Yes, there has been substantial job growth, and GDP is now above its pre-crisis peak — albeit in the slowest recovery since the South Sea bubble 300 years ago. But the weakness in productivity continues to illustrate the rottenness.