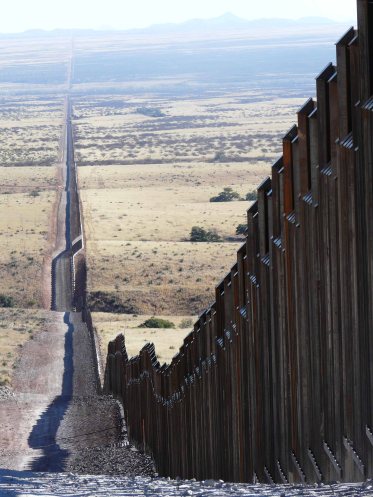 But what about replacing the current border wall with a bigger one? Surely that will stop migrants from coming across the border? Well, not really. Israel has some pretty high and deep barriers with Gaza, and that hasn’t prevented Gazan militants from burrowing under them and getting in. What is going to stop Mexicans — including and perhaps especially the extremely well-financed drug gangs who surely could gain access to advanced tunnelling equipment — from doing the same thing?

So building a wall to prevent undocumented migration is really dodgy from a practical perspective.

From an economic perspective, it’s much worse than that. Getting Mexico to pay for it by confiscating it from money sent to Mexico by Mexicans in America — as Trump contends he can — would simply incentivize the use of internationalized and decentralized technologies such as Bitcoin, which could evade Trump’s confiscations. And with an estimated cost of $15 to $25 billion, that has a very high opportunity cost, regardless of who pays for it. That’s more than a dozen hospitals. Or a house for every homeless person in America. Heck, NASA could build two bases on the moon for the cost of Trump’s fantasy wall.

But all this is assuming that a wall that could successfully shut out undocumented migrants would benefit the U.S. The truth is that it wouldn’t. The reality is that shutting people out of your economy deprives it of skills and talent and labour. 100 people can produce more than 99. 1000 people can produce more than 999. When a Mexican crosses the border, they bring with them potential productivity, whether or not they are carrying papers. Shut that out, and you slow down the economy.

When people can move freely, they can find the niche where they are most efficient. Everybody is different. Everyone is in possession of unique and differing talents, and everyone’s most productive niche in the global economy differs. Mexicans stream across the border because there are niches in the U.S. economy where they can be more productive than in Mexico. Many Americans go abroad to work, too, as they find economic opportunities abroad. Denying people the right to freely move to find their most productive niche in the global economy is simply self-defeating, in economic terms. It forces people to become less productive than they otherwise could be.

Trump offers false hope to the victims of globalization. Yes, very many U.S. jobs have migrated overseas because overseas labour can do things cheaply and efficiently. Those jobs aren’t magically going to come back because a blonde buffoon is in the White House wasting resources by building walls on the Mexican border. The real hope for American victims of job migration is retraining and education and investment in new cutting-edge industries where America can gain a competitive advantage, so that people can find a new niche in the global economy.

17 thoughts on “The Economics of Building That Wall”