What is the political correctness that the Trump supporters are rejecting?

In his novel 1984, George Orwell imagined a future world where speech was greatly restricted.

He called that the language that the totalitarian state in his novel created “Newspeak”, and it bears a striking resemblance to the political correctness that we see in America right now.

According to Wikipedia, Newspeak is “a reduced language created by the totalitarian state as a tool to limit free thought, and concepts that pose a threat to the regime such as freedom, self-expression, individuality, peace, etc. Any form of thought alternative to the party’s construct is classified as ‘thoughtcrime.’”

Infowars then lists 19 examples, from “The Missouri State Fair… permanently bann[ing] a rodeo clown from performing because he wore an Obama mask” to “a Florida police officer” losing his job for calling Trayvon Martin a “thug”, to “the governor of California signing a bill to allow transgendered students to use whatever bathroom and gym facilities they would like”.

The overriding concern expressed by the Trumpians appears to be that liberals are trying to enforce their worldview through the use of language. They are trying, in other words, to promote their own worldview through making it difficult to dissent from the “politically correct” version of reality.

I even disagree that political correctness is a new phenomenon. What was McCarthyism, if not a hardcore form of right-wing political correctness? What was the Bush Administration renaming French Fries as Freedom Fries as protest over the French government’s refusal to participate in the Iraq war if not trying to use language to police reality?

Of course, it is completely possible for someone to believe that X is true and respectfully disagree with the opposing view that X is not true, and vice versa.

But that is hardly the direction that the country is headed. Many metrics show that Americans are becoming more and more politically polarized, as this chart via Pew illustrates: 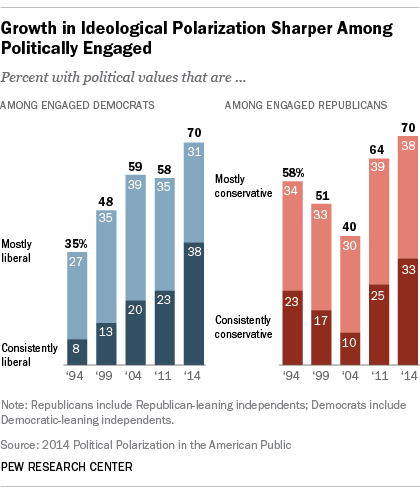 With that in mind, what the selection of Donald Trump represents is not so much a rejection of political correctness as a scorched-earth rejection of the other side’s version of reality. In other words, the polarization is becoming more extreme and both sides’ versions of what is “politically correct” are becoming more distinct and noticeable.

This is entirely unsurprising. With more freedom and liberty comes divergence. People are variable and heterogeneous. They are not all motivated by the same things and in pursuit of the same goals. Giving people freedom to pursue their own goals and interests inevitably leads to pluralism, if not to full-blown polarization.

Trump, of course, would point out that these measures were the norm throughout most of American history and that the status quo is some kind of freakish digression. But to boil it down to its core essence, “Making American Great Again” is about turning back multiculturalism toward monoculture. It is, ultimately, about enforcing an idea — that a more cohesive and less diverse society is a good thing — on everyone else.

Of course, when you have two groups whose understanding of the world fundamentally disagrees, it is very hard to achieve unity and stability. Lots of wars have been fought over this very kind of thing. The notion of a culture war is actually quite prescient as cultural warfare is exactly what is occurring between the Trumpians and the liberals.

I doubt that either side will be victorious. The fragmentation of the world that has led to these divergences is probably not the result of a liberal conspiracy or liberal control of government. It is much more likely to be a result of technology. Why? Well, consider the way that technology is fragmenting the media. It is much easier to live in a local monoculture when your main source of global news is a town notice board, or two radio channels, or four TV channels, or even fifty cable channels, than it is when your main source of global news is the huge and varied and exponentiating internet. As technology continues to fragment communication and the spread of ideas, people will continue to pursue their own individual interests with the effect of further cultural divergence. Virtual reality will be a very important technology in developing this, as it will begin to let us not only listen to our own FOX News/MSNBC echo chambers, but live in virtual worlds to suit our own tastes. We are heading toward a world where we can build our own echo chambers and shut off anything we find offensive or unpleasant.

In other words, if you think that cultural fragmentation is bad now — or that the Trump supporters are suggesting extreme measures in order to reimpose a degree of cultural hegemony — you ain’t seen nothing yet. The decentralization of warfare through the adaptation of drone technology and things like 3-D printed guns and bullets means that many skirmishes will likely be fought over this stuff again.