A beautiful cartoon that exposes the absurdity of the Petraeus saga: 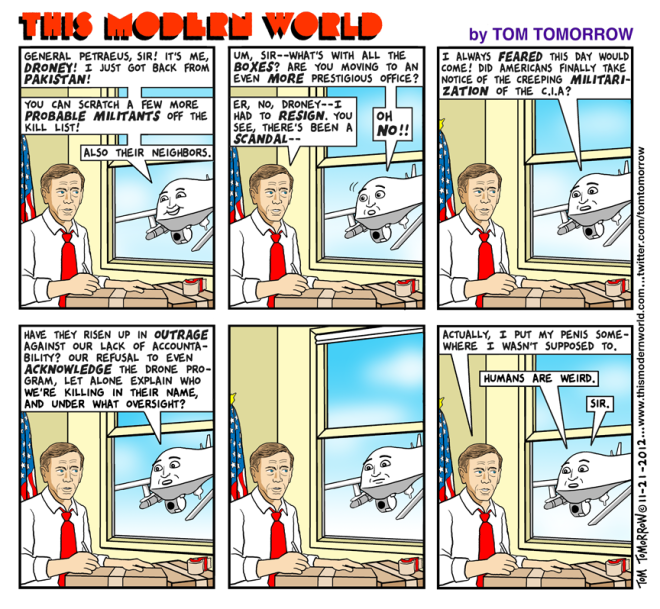 A radical idea: instead of carrying out assassinations based on secret kill lists, perhaps the Federal government could start obeying the Constitution, and start issuing arrest warrants or extradition requests for individuals suspected of criminal activity so that they can be tried by a court of law in front of a jury of their peers. We used to call this strange and antiquated notion due process.

The decision to use flying death robots — or as they are known in common speech “drones” — to indiscriminately assassinate terrorism suspects (and their families and neighbours) has already created a new swelling of anger against America in the nations where suspected terrorists have been targeted. As Obama himself recently put it, “there’s no country on earth that would tolerate missiles raining down on its citizens from outside its borders.” Presumably, this includes Pakistan, and Yemen, and Libya and Somalia, and other nations where American drone missiles have rained down on citizens?

And one day, other nations  — like China, which is rapidly putting drones into the skies  — might choose to use flying death robots to assassinate their own suspected terrorists on American soil. Would the American government have any grounds to complain?