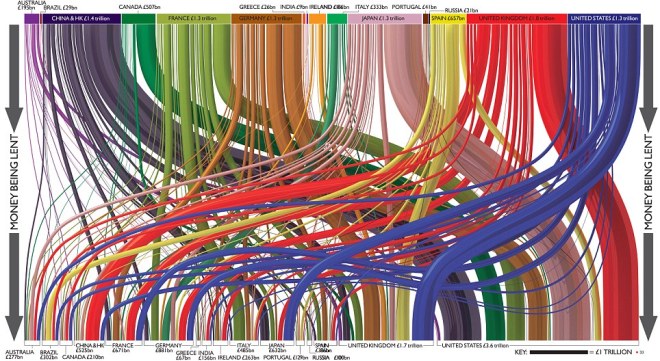 Interconnected networks exhibit a knife-edge, or tipping point, property. Within a certain range, connections serve as a shock-absorber. The system acts as a mutual insurance device with disturbances dispersed and dissipated. But beyond a certain range, the system can tip the wrong side of the knife-edge. Interconnections serve as shock-ampliers, not dampeners, as losses cascade.The system acts not as a mutual insurance device but as a mutual incendiary device.

The greater story behind Mark Carney’s appointment to the Bank of England may be the completion of Goldman Sachs’ multi-tentacled takeover of the European regulatory and central banking system. 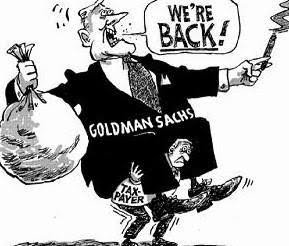 But let’s take a moment to look at the mess he is leaving behind in Canada, the home of moose, maple syrup, Jean Poutine and now colossal housing bubbles.

George Osborne (who as I noted last month wants more big banks in Britain) might have recruited Carney on the basis of his “success” in Canada. But in reality he is just another Greenspan — a bubble-maker and reinflationist happy to pump the banking sector full of loose money and call it “prosperity” before the irrational exuberance runs dry, and the bubble inevitably bursts. 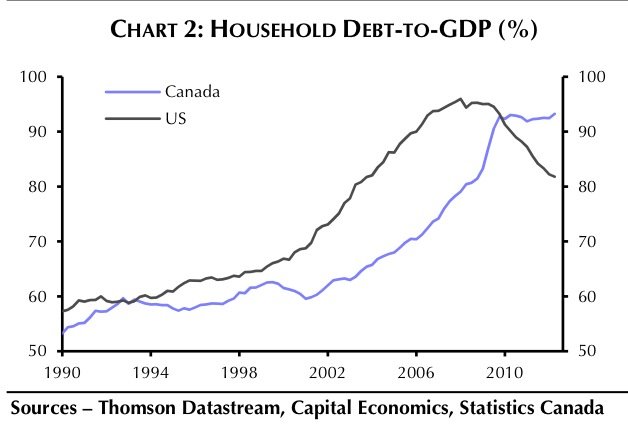 Deleveraging? Not in Canada.

Household debt levels have reached a new high, increasing the vulnerability of average Canadians to unexpected economic shocks just at a time when uncertainty is mounting.

Despite signs that Canada’s economic recovery is fizzling, data released by Statistics Canada Tuesday shows that the ratio of credit market debt to personal disposable income climbed to 148.7 per cent in the second quarter, surpassing the previous record of 147.3 per cent set in the first three months of this year. 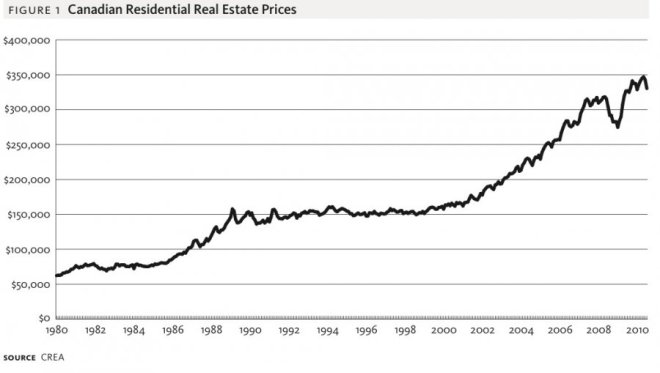 Booming commodities exports and skyrocketing housing prices are encouraging Canadians to spend far beyond their means, while binging on credit, mimicking their American neighbors’ profligate behavior of six years earlier. (They’re thinking, “Canada is different!”) RBC Global Asset Management’s chief economist warns that Canada’s record household debt could “spell its undoing,” while Moody’s warns that Canadian banks face significant risk due to their exposure to overleveraged Canadian consumers. Maybe things really are different in Canada, where a group of under-21-year-olds got caught by the police for racing $2 million worth of exotic supercars, including Ferraris and Lamborghinis. Or not.

The age-old misperception that this time is different, that Chinese investors will continue to spend millions on crack shacks in Vancouver, that an industrial boom in East Asia will continue to support demand for Canadian commodities, that Canada’s subprime slush isn’t vulnerable, that hot inflows from capital rich low-interest rate environments like Japan and America will continue forever.

In the short term what is going on is that the ex-Goldmanite Carney has pumped up a huge bonanza of securitisation and quick profits for big banks and their management who are laughing all the way to the Cayman Islands (or in Carney’s case, Threadneedle Street). Once the easy money quits flowing into the Canadian financial system from abroad, defaults will begin to accumulate, cracks will quickly appear, and Canada will spiral into debt-deflation. Taxpayers in Canada (and in other similar cases like Australia) may well end up bailing out the banks profiting so handsomely now, just like their American and British and Japanese cousins.

In a hundred years, people may be taking out zero-down mortgages against building geodesic domes on Mars or the Moon, and flipping them off to greater fools for huge profits. Because this time is different, right? And another crash and depression will follow.

The Telegraph reports that George Osborne thinks big banks are good for society:

The Chancellor warned that “aggressively” breaking up banks would do little to benefit the UK and insisted the Government’s plans to put in place a so-called “ring fence” to force banks to isolate their riskier, investment banking businesses from their retail arm was the right way to make the financial system safer.

“If we aggressively broke up all of our big banks, I am not sure that, as a society, we would benefit from it,” he said. “We don’t have a huge number of banks, sadly, large banks. I would like to see more.”

His comments came as he gave evidence to the parliamentary commission on banking standards where he was accused of attempting to pressure members into supporting his ring-fencing reforms.

“That work has been accepted, as far as I’m aware, by all the major political parties. We are now on the verge of getting on with it,” he said.

Several members of the Commission have argued in favour of breaking up large banks, including former Chancellor, Lord Lawson. 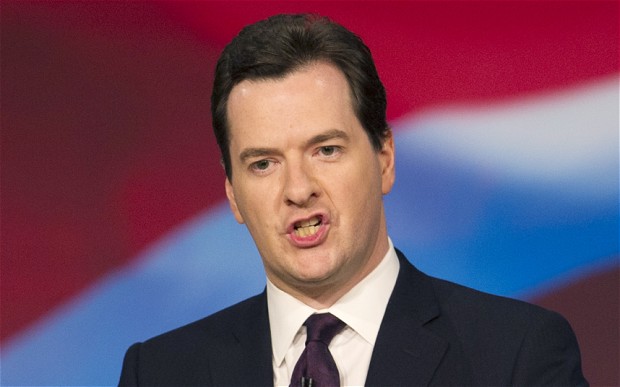 This is really disappointing.

Why would Osborne want to see more of something which requires government bailouts to subsist?

Because that is the reality of a large, interconnective banking system filled with large, powerful interconnected banks.

The 2008 crisis illustrates the problem with a large interconnective banking system. Big banks develop large, diversified and interconnected balance sheets as a sort of shock absorber. Under ordinary circumstances, if a negative shock (say, the failure of a hedge fund) happens, and the losses incurred are shared throughout the system by multiple creditors, then those smaller losses can be more easily absorbed than if the losses were absorbed by a single creditor, who then may be forced to default to other creditors. However, in the case of a very large shock (say, the failure of a megabank like Lehman Brothers or — heaven forbid! — Goldman Sachs) an interconnective network can simply amplify the shock and set the entire system on fire.

Interconnected networks exhibit a knife-edge, or tipping point, property. Within a certain range, connections serve as a shock-absorber. The system acts as a mutual insurance device with disturbances dispersed and dissipated. But beyond a certain range, the system can tip the wrong side of the knife-edge. Interconnections serve as shock-ampliers, not dampeners, as losses cascade. The system acts not as a mutual insurance device but as a mutual incendiary device.

The presence of dense connections imply that large negative shocks propagate to the entire financial system. In contrast, with weak connections, shocks remain confined to where they originate.

What this means (and what Osborne seems to miss) is that large banks are a systemic risk to a dense and interconnective financial system.

Under a free market system (i.e. no bailouts) the brutal liquidation resulting from the crash of a too-big-to-fail megabank would serve as a warning sign. Large interconnective banks would be tarnished as a risky counterparty. The banking system would either have to self-regulate — prevent banks from getting too interconnected, and provide its own (non-taxpayer funded) liquidity insurance in the case of systemic risk — or accept the reality of large-scale liquidationary crashes.

In the system we have (and the system Japan has lived with for the last twenty years) bailouts prevent liquidation, there are no real disincentives (after all capitalism without failure is like religion without sin — it doesn’t work), and the bailed-out too-big-to-fail banks become liquidity sucking zombies hooked on bailouts and injections.

Perhaps it is unpatriotic of me to ask, but are France’s shrill politicians right? Is the United Kingdom the weak link?

The entente is no longer so cordiale. As the big credit rating firms assess whether to strip France of its prized AAA status, Bank of France chief Christian Noyer this week produced a long list of reasons why he believes the agencies should turn their fire on Britain before his own country.

But is the outlook across the Channel really better than in Britain? Taking Noyer’s reasons to downgrade Britain – it “has more deficits, as much debt, more inflation, less growth than us” – he is certainly right on some counts.

On growth, neither country can claim a stellar performance. France’s economy grew 0.4% in the third quarter and Britain’s 0.5%. Nor has either a particularly rosy outlook. In Britain the economy is expected to grow by 1.6% in 2012. But in the near term there is a 1-in-3 chance of a recession, according to the independent Office for Budget Responsibility. In France, the IMF predicts slightly slower 2012 growth of 1.4%. But in the near term France’s national statistics office predicts a technical, albeit short, recession.

There is one significant factor everyone is overlooking. 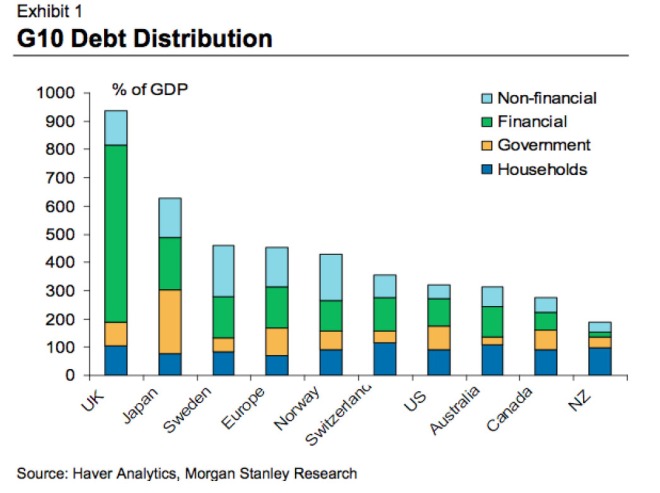 While we sympathize with England, and are stunned by the immature petulant response from France and its head banker Christian Noyer to the threat of an imminent S&P downgrade of its overblown AAA rating, the truth is that France is actually 100% correct in telling the world to shift its attention from France and to Britain.

France should quietly and happily accept a downgrade, because the worst that could happen would be a few big French banks collapsing, and that’s it. If, on the other hand, the UK becomes the center of attention then this island, which far more so than the US is the true center of the global banking ponzi scheme, will suddenly find itself at the mercy of the market.

And why is the debt so high? Well, the superficial answer is that the UK is a “world financial centre”. The deeper answer is that the UK allows unlimited re-hypothecation of assets. Re-hypothecation is when a bank or broker re-uses collateral posted by clients, such as hedge funds, to back the broker’s own trades and borrowings. The practice of re-hypothecation runs into the trillions of dollars and is perfectly legal. It is justified by brokers on the basis that it is a capital efficient way of financing their operations. In the US brokers can re-hypothecate assets up to 140% of their book value.

In the UK, there is absolutely no statutory limit on the amount that can be re-hypothecated. Brokers are free to re-hypothecate all and even more than the assets deposited by clients. That is the kind of thing that creates huge interlinked webs of debt. And much of Britain’s huge debt load — particularly in the financial industry — is one giant web of endless re-hypothecation. Even firms (e.g. hedge funds) that do not internally re-hypothecate collateral are at risk, because their assets may have been re-hypothecated by a broker, or they may be owed money by a firm that re-hypothecates to high heaven. The problem here is the systemic fragility.

Simply, the UK financial sector has been attracting a lot of global capital because some British regulations are extremely lax. While it is pleasing to see the Vickers report, that recommends a British Glass-Steagall separation of investment and retail banking, becoming government policy, and while such a system might have insulated the real economy from the madness of unlimited re-hypothecation, the damage is already done. The debt already exists, and some day that debt web will have to be unwound.

Now Britain does have one clear advantage in over France. It can print its own money to recapitalise banks. But with inflation already prohibitively high, any such action is risky. If short sellers turn their fire on Britain, we could be in for a bumpy ride to hell and back.

UPDATE: Readers wanting to understand the true extent of economic degradation in some parts of the UK ought look no further than a recent post…