Ron Paul’s signature Audit the Fed legislation finally passed the House; on July 25, the House bill was passed 327 to 98. But the chances of a comprehensive audit of monetary policy — including the specifics of the 2008 bailouts — remain distant. 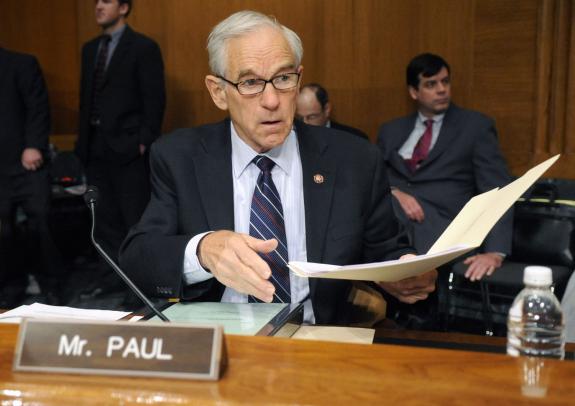 Why? Well, the Fed doesn’t seem to want the sunshine. Critics including the current Fed regime claim that monetary policy transparency would politicise the Fed and compromise its independence, and allow public sentiment to interfere with what they believe should be a process left to experts dispassionately interpreting the economic data. Although the St. Louis Fed makes economic data widely available, monetary policy is determined behind closed doors, and transactions are carried out in secret.

We fully accept the need for transparency and accountability, but it is a well-established fact that an independent central bank will provide better outcomes.

When the Fed talks about independence, what they’re really talking about is secrecy. What the GAO cannot audit is monetary policy. It would not be able to look at agreements and operations with foreign central banks, and governments, and other banks, transactions made under the direction of the FOMC [Federal Open Market Committee], and discussions or communications between the board and the Federal Reserve system relating to all those items. And why this is important is because of what happened 4 years ago. It’s estimated that the amount of money that went in and out of the Fed overseas is $15 trillion. How did we get into this situation where Congress has nothing to say about bailing out all these banks?

What I am struggling to understand is why the Fed is so keen to not disclose the inner workings of monetary policy even in retrospect. How can we judge the success of monetary policy operations without the raw facts? How can we have an informed debate about what the Fed does unless we know exactly what the Fed does? Why should only insiders be privy to this information? Surely the more we know, the better debate economists and the wider society will be able to have about Fed policy?

There are plenty of critics of Bernanke and the Fed, including both those who believe the Fed should do more, and those who believe the Fed should do less. But it seems very difficult to appraise the Fed’s monetary policy operations unless we can look at every aspect of its policy. If Bernanke and the FOMC are confident that their decisions have been the right ones, why can they not at least disclose the full extent of monetary policy and explain their decisions? If they are making the right decisions, they should at least have the confidence to try and explain them.

All that the current state of secrecy does is encourage conspiracy theories. What is the FOMC trying to hide? Are they making decisions that they think would prove unpopular or inexplicable? Are they ashamed of their previous decisions or decision-making frameworks? Are they concerned the decision making process will make them look bad? Are they bailing out well-connected insiders at the expense of the wider society?

Well, my intuition says one thing — the change in trajectory correlates very precisely with the end of the Bretton Woods system. My intuition says that that event was a seismic shift for wages, for gold, for oil, for trade. The data seems to support that — the end of the Bretton Woods system correlates beautifully to a rise in income inequality, a downward shift in total factor productivity, a huge upward swing in credit creation, the beginning of financialisation, the beginning of a new stage in globalisation, and a myriad of other things.

Some, including Peter Thiel and James Hamilton, have suggested that there is data to suggest that an oil shock may have been the catalyst that put us into a new trajectory. 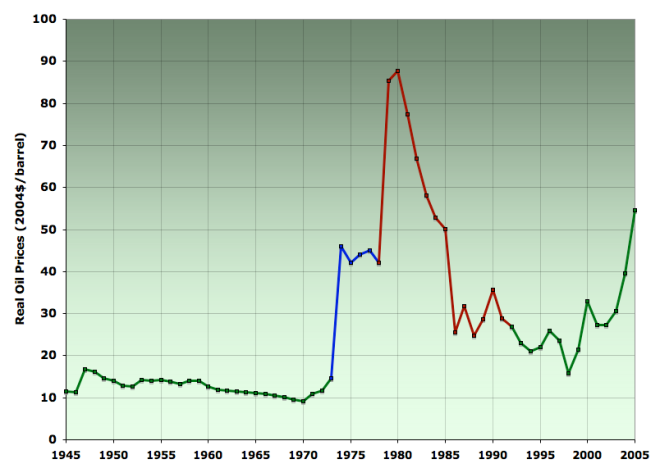 And that this spike may be related to a fall in oil prices discoveries:

I certainly think that the drop-off in oil discoveries was a huge psychological factor in the huge oil price spike we saw in 1980. But the reality is that although production did fall, it has recovered: 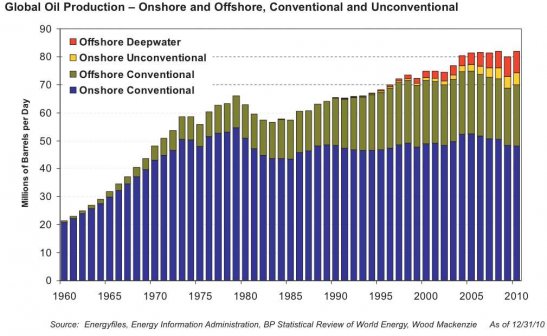 The point becomes clearer when we take the dollar out of the equation and just look at oil priced in wages:

Oil prices in terms of US wages ended up lower than they had been before the oil shock.

What happened in the late 70s and early 80s was a blip caused by the (very real) drop-off in American reserves, and the (in my view, psychological — considering that global proven oil reserves continue to rise to the present day) drop-off in global production.

But while oil production recovered and prices fell, wages continued to stagnate. This suggests very strongly to me that the long-term issue was not an oil shock, but the fundamental change in the nature of the global trade system and the nature of money that took place in 1971 when Richard Nixon ended Bretton Woods.

UPDATE: Commenters are pointing out that I should probably have concentrated a bit more on the trade and globalisation dimension, which I did mention in passing. However, I see this as an outgrowth of the end Bretton Woods, because it began just after Bretton Woods was ended and there is no way that America could afford to run the kind of trade balance it runs today with the world had America stayed in the Bretton Woods system.

I have covered this issue in quite some depth in the past.

You see the contrast: a doubling of family incomes in the post war generation compared with maybe 20 percent since, and family incomes growing in line with GDP before, lagging far behind since, with the difference basically being the rising share of the 1 percent.

This is real stuff, not some trivial envy-driven concern. But we must be very, very quiet about it, right?

Krugman is very quiet about one thing: the fundamental change in the monetary system that took place in 1971, the year that Richard Nixon made the dollar a completely fiat currency by removing its peg to gold. After that event, income inequality has really raced ahead.

Now I know full well correlation does not imply causation. But I also know that giving central bankers free rein to print as much money to hand out like candy to their friends in big finance does imply that they will do it. How do I know that? Because they do:

From the Levy Institute:

The bottom line of crisis of 2007-9: a Federal Reserve bailout commitment in excess of $29 trillion.

My hypothesis is that leaving the gold standard was a free lunch: headline GDP growth could be achieved without any real gains in productivity, or efficiency, or in infrastructure, but instead by pumping money into the system and assuming that this would have a positive effect on the economy as a whole. After all — say the Keynesians — “aggregate demand (i.e. money circulation) is the state of the economy”.

But in reality “higher GDP” and “higher aggregate demand” just mean more money circulating. It’s perfectly possible for more money to circulate while the real economy (productivity, labour, technology, infrastructure, etc) deteriorates. In fact, in many respects this is exactly what happened during the Bush administration, where trillions of dollars of productive capital was burnt up on military adventurism.

Now maybe I have a thick skull. If so, could someone explain to me what I’m missing? The Federal Reserve was set free to print as much money as it wanted and give it to its friends with little oversight, and in the following years income inequality soared.