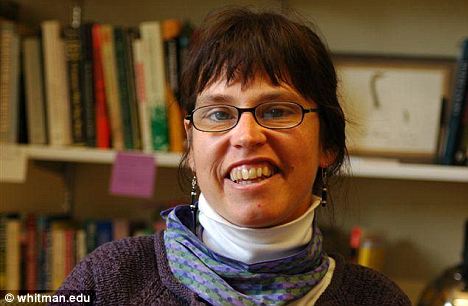 From the Daily Mail:

An Oregon University professor has controversially compared skepticism of global warming to racism.

The professor, who holds a B.S. in biology and a master’s and PhD in sociology, argued that ‘cultural resistance’ to accepting humans as being responsible for climate change ‘must be recognised and treated’ as an aberrant sociological behaviour.

Really? Doubters have an illness? Isn’t pathologising dissidents a hallmark of authoritarianism? Weren’t dissidents under the Soviet Union often sent to psychiatric hospitals to be “treated” for their behaviour? Hasn’t Norgaard read Solzhenitsyn’s Gulag Archipelago?

Norgaard last week attended the annual four-day ‘Planet Under Pressure’ international conference in London, where she presented her controversial paper to delegates on Wednesday.

The scientists behind the event recently put out a statement calling for humans to be packed into denser cities so that the rest of the planet can be surrendered to mother nature.

And fellow attendee Yale University professor Karen Seto told MSNBC: ‘We certainly don’t want them (humans) strolling about the entire countryside. We want them to save land for nature by living closely [together].’

And does it include those (including me) who believe that man-made climate change is happening  — and has been happening for thousands of years — but that it seems to broadly be a good thing?

Human emissions of carbon dioxide will defer the next Ice Age, say scientists.

The last Ice Age ended about 11,500 years ago, and when the next one should begin has not been entirely clear.

Researchers used data on the Earth’s orbit and other things to find the historical warm interglacial period that looks most like the current one.

In the journal Nature Geoscience, they write that the next Ice Age would begin within 1,500 years – but emissions have been so high that it will not.

Certainly, if human emissions keep the Earth warmer than the pre-civilisation cycle (i.e. widespread cyclical glaciation), that would appear to be a good thing in the long run for human civilisation.

And what about my position that an ultra-complex (and arguably stochastic) system like the climate is not meaningfully modellable, and therefore that climate certainty is impossible? While it seems to make sense that higher levels of atmospheric CO2 will produce higher temperatures, and while there are a myriad of simplified models out there that seem to suggest the same thing, there is no substitute for long-term empirical evidence, of which we have very little. In a system as complex as the Earth’s climate, there could be a whole swathe of effects that we have not yet identified that could drastically change the outcome (for better, or for worse). For Norgaard, does an understanding of the limitations of probabilistic modelling constitute a mental illness? Should I be committed to treatment to “cure” me of my beliefs?

Because that is what Norgaard’s words lead me to believe. And that sounds worryingly like Neo-Stalinism.