One mistake I may have made in the two years I have been writing publicly is taking the rhetoric of the Chinese and Russian governments a little too seriously, particularly over their relationship with the United States and the dollar.

Back in 2011, both China and Russia made a lot of noise about dumping US debt, or at least investing a lot less in it. Vladimir Putin said:

They are living beyond their means and shifting a part of the weight of their problems to the world economy. They are living like parasites off the global economy and their monopoly of the dollar. If [in America] there is a systemic malfunction, this will affect everyone. Countries like Russia and China hold a significant part of their reserves in American securities. There should be other reserve currencies.

And China were vocally critical too:

China, the largest foreign investor in US government securities, joined Russia in criticising American policymakers for failing to ensure borrowing is reined in after a stopgap deal to raise the nation’s debt limit.

But just this month — almost two years after China blasted America for failing to cut debt levels — China’s Treasury holdings hit a record level of  $1.223 trillion.  And Russian treasury holdings are $20 billion higher than they were in 2012. So all of those protestations, it seems, were a lot of hot air. While it is true that various growing industrial powers are setting up alternative reserve currency systems, China and Russia aren’t ready to dump the dollar system anytime soon.

Now, the Federal Reserve has to some degree further enticed China into buying treasuries by giving them direct access to the Treasury auctions, allowing them to cut out the Wall Street middlemen. Maybe if that hadn’t happened, Chinese Treasury ownership would be lower.

But ultimately, the present system is very favourable for the BRICs, who have been able to build up massive manufacturing and infrastructural bases as a means to satisfy American and Western demand. In that sense, the post-Bretton Woods globalisation has been as much a free lunch for the developing world as it has been for anyone else. And why would China and Russia want to rock the boat by engaging in things like mass Treasury dumpings, trade war or proxy wars? They are slowly and gradually gaining on the West, without having to engage in war or trade war. As I noted in 2011:

I believe that the current world order suits China very much — their manufacturing exporters (and resource importers) get the stability of the mega-importing Americans spending mega-dollars on a military budget that maintains global stability. Global instability would mean everyone would pay more for imports, due to heightened insurance costs and other overheads.

Of course, a panic in the Chinese mainland — maybe a financial crash, or the bursting of the Chinese property bubble — might result in China’s government doing something rash.

But until then it is unlikely we will see the Eurasian holders of Treasuries engaging in much liquidation anytime soon — however much their leaders complain about American fiscal and monetary policy. Actions speak louder than words.

Most of us are at least passingly familiar with the theory: the completion of a new tallest skyscraper presages a market crash. Over-exuberant construction reflects over-exuberant markets, and over-confidence often spills over as the hyper-bullish slowly (and then quickly) realise that the good times are over.

Here’s the story so far:

And here’s the next chapter — earmarked for completion in January 2013: 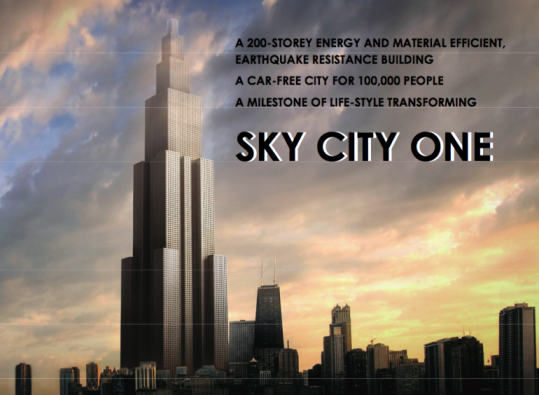 Where else but China? As if that country didn’t already have enough empty buildings, enough empty office space, enough empty homes, and enough grey uninspired architecture. And it’s not like Changsha — the relatively-sparsely populated city where the thing is to be built — is running out of countryside to expand into.

Sky City One is planned to be prefabricated and built onsite, to a timeframe of just ninety days (that will instil confidence that the building won’t spontaneously collapse, right?) and at a much lower cost than the current titleholder (which of course presaged the 2008 crash, and bankrupted its builders) the Burj Khalifa.

“A milestone of life-style transforming” sounds about right (they have enough money to build a 200 storey building, but not enough to pay for good English translation?). The world will be a very different place after the next crash.

Not so good news for property speculators who are sure to dump money into what will soon be little better than a tax liability. But good news for Jim Chanos, and every other investor determined to short everything Chinese.