A reader brings a bizarre leaked e-mail to my attention:

We (Mike H) have done a modest amount of work on degree-days for G-S. They
now want to extend this. They are involved in dealing in the developing
energy futures market.

G-S is the sort of company that we might be looking for a ”strategic
alliance” with. I suggest the four of us meet with ?? (forgotten his name)
for an hour on the afternoon of Friday 12 June (best guess for Phil & Jean
– he needs a date from us). Thanks.

Now, I don’t really have any problem with the idea that a highly active and productive species like human beings can heavily influence our climate. In fact, I think there is a good deal of circumstantial evidence to suggest that we have been doing it for millennia.

The ice-core record shows that the level of carbon dioxide in the atmosphere made an anomalous upturn about 7,000 years ago, and that methane levels, which were also falling, began to increase about 5,000 years ago. These numbers correspond well with the rise of farming in Europe and Asia.

The implication is that this small uptick in greenhouse gases has warmed the Earth, staving off new glaciation and thereby creating conditions beneficial to the development of modern civilisation.

So my real problem is with the view that somehow humanity can accurately predict future climactic trends via simulations and models. The idea that economies are simply too complex to accurately model applies even more to climates, which are vastly more complicated systems. Nonetheless, human activity seems to have caused atmospheric changes: 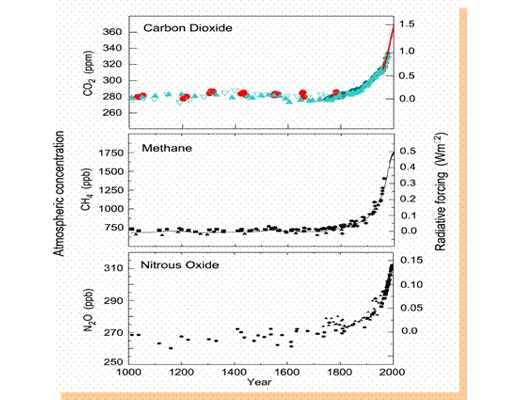 While we can’t reliably predict what the precise results of this will be, keeping global greenhouse gas levels close to the pre-industrial ones seems to be a good insurance policy.

Imposing emissions limitations using carbon credits which can then be traded on exchanges is no such thing. Why?

Most likely, Goldman has long understood this cycle, and will be looking to profit on the way up, and on the way down, just as they have done with various other derivatives.

If the influential climate scientists at CRU were looking for a strategic alliance with Goldman Sachs, they were barking up the wrong tree in creating an effective insurance policy. If they were looking to enjoy the fruits of the global derivatives ponzi, then Goldman Sachs were precisely the right people.

In reality, US foreign policy — with its deep focus on keeping the global energy trade flowing — acts as an implicit multi-trillion dollar subsidy on keeping oil and hydrocarbons cheap. This is an artificial disincentive against the development of decentralised alternative energy infrastructure (solar, thorium, synthetic oil, carbon scrubbing, etc). Climate scientists who want to see real change would do better to focus on decreasing this market distortion, rather than creating more market distortion through carbon trading.