According to a new Gallup poll, 72 percent of Americans say that big government is a greater threat to the U.S. in the future than big business or big labor, a record high in the half century that Gallup has been asking the question. The previous high for big government was 65 percent in 1999 and 2000:

And this isn’t just Fox News-watching Republicans who think that Obama is a Communist Muslim born in Kenya who is plotting to seize all privately-owned guns and declare martial law.

A new Rasmussen Reports national telephone survey finds that 64% of Likely U.S. Voters prefer a government with fewer services and lower taxes over one with more services and higher taxes. That’s unchanged from last month and consistent with findings in regular surveys since late 2006.

In fact, a plurality of Americans have called for small government and lower taxes ever since the days of Reagan. 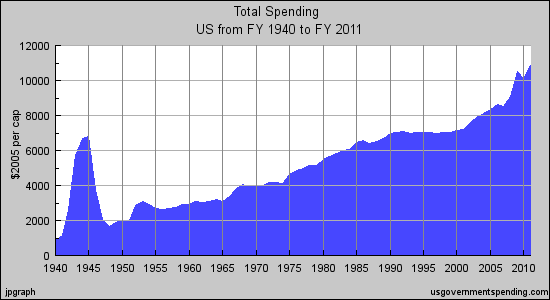 So what’s the difference? Is it that voters outwardly claim to be in favour of smaller government, and then when it comes down to it choose the advocates of big government? I don’t think so — I think it is that voters aren’t being given a real choice.

Here’s the increase in national debt by President:

The reality is that — with the exception of Obama — Americans have again and again opted for a candidate who has paid lip-service to small government. Even Bill Clinton paid lip service to the idea that “the era of big government is over” (yeah, right). And then once in office, they have bucked their promises and massively increased the size and scope of government. Reagan’s administration increased the debt by 190% alone, and successive Presidents — especially George W. Bush and Barack Obama — just went bigger and bigger, in total contradiction to voters’ expressed preferences.

The choice between the Republicans and Democrats has been one of rhetoric and not policy. Republicans may consistently talk about reducing the size and scope of government, but they don’t follow through.Today Ron Paul, the only Republican candidate who is putting forth a seriously reduced notion of government, has been marginalised and sidelined by the major media and Republican establishment. The establishment candidate — Mitt Romney — as governor of Massachusetts left that state with the biggest per-capita debt of any state. His track record in government and his choice of advisers strongly suggest that he will follow in the George W. Bush school of promising smaller government and delivering massive government and massive debt.

So will the American people eventually get what they want? To do that, they have to ditch the hierarchies and orthodoxies of the past. Ron Paul and his tireless band of youthful supporters look set to achieve a strong showing at the Republican convention, as well as so far winning party chairs in Iowa, Colorado, Alaska, and Virginia. The Republican party — currently dominated by ageing tax-and-spend boomer Republicans — is being taken over by the libertarian youth who crave small government at home, as well as a smaller foreign policy. Ron Paul has taken the majority of youth votes in a plurality of states in 2012. And even if Ron Paul is not on the presidential ballot, Gary Johnson — a consistent advocate for lower debt, lower taxes, and smaller government — seems set to take a large slice of the vote in November.

As the mainstream parties continue to defy a majority of voters’ will and accrue more debt and make government bigger and bigger (while failing to address problems of unemployment and underemployment)  it seems natural and inevitable that more and more Americans — especially young Americans (who tend more and more to be unemployed and underemployed) — will abandon the sclerotic big-government Republicans and Democrats.

Trouble is, things may go badly wrong before Americans get the chance to put a practitioner of smaller government into power. Already a majority of Eurasian manufacturing and resource-producing nations have ditched the dollar for bilateral trade. Dollars and treasury bonds have long been America’s greatest export — and the greatest pillar of support for growth in spending and welfare. With the dollar’s downfall, smaller government may not be a choice.

Submitted by Andrew Fruth of AcceptanceTake

Get ready to travel to a new dimension of sound, sight, and mind because President Obama has proposed to spend less on discretionary spending in 2022 than in 2011 in real and nominal terms.  That means he expects to spend fewer dollars in 2022, even after being debased by inflation, on discretionary functions than he did in 2011.  These projections come from a President that increased the entire U.S. debt by over 45% in a matter of 4 years.  We may have a credibility problem:

A closer look at the 2013 budget shows that Obama, in inflation and population adjusted dollars, wants to decrease discretionary spending from $1261 billion dollars in 2013 to $982 billion in 2022 for a decrease of 22.1%!  So, for the exception of Social Security, Medicare, Medicaid, other mandatory programs, interest, TARP, and a very small amount for “adjustments for disaster costs,” Obama plans to cut spending by 22.1% in adjusted dollars. Do we have any believers out there?:

But it doesn’t stop there.  Look at the interest rates the government expects to pay on its public debt.  The net interest row does not include intergovernmental debt.  All years are estimates except for 2011:

The differences, however, are slight.  The 1990s still had significantly higher interest rates in the 1990s than Obama projects, even for 2022:

You might be thinking that the government plans on the Federal Reserve buying up Treasuries to keep Treasury rates low.  Well, maybe, but the government only projects the “GDP chained price index” to range from 1.6%-2.1% from 2011 to 2022.  Needless to say, unless banks, as a whole, are deleveraging throughout the whole period, the Federal Reserve’s intervention in the Treasury market would create more than 2.1% price increases.

So, then, where is the $9.358 (minus whatever amount has been borrowed so far in fiscal year 2012) trillion at 1.94%-4.36% going to come from if not the Federal Reserve?  Pick you choice: a) the free market in the U.S. b) China c) Japan d) not going to happen.  I would provide an answer key for this question, but I don’t want to insult your intelligence.

So, if the government does plan on borrowing this much, assuming it can get it from somewhere other than the Fed, what happens if interest rate levels rise to rates similar to those found in the 1990s and 1980s?  Well, fortunately, in my book The Debtor’s Ultimatum: Defy, Debase, or Default I’ve done the research.  By the way, the following chart doesn’t even include the interest on the additional interest that would develop over this time from higher interest rates.

Government Numbers for both the chart above and below are sourced from the Midsession Review 2012, so the data are a little bit different from the data mentioned previously that is from the 2013 budget.

Here’s the Net Interest on Public Debt Alone in Billions of $:

Yeah, and there’s even more.  The government receipts projections are incredibly optimistic.  Part of that optimism is due to projected increase in economic growth and part of it is due to Obama’s proposal to let the Bush tax cuts finally expire.  We’ll see if either of those possibilities comes to pass.  I have my doubts about both.

Rather than pontificate, I’ll let you look at the 2013 budget data yourself.  The following are federal receipts, in trillions of dollars.  2012-2017 are estimates:

Did you notice that crazy jump from 2012-2013?  The government is expecting some pretty big economic growth.  We know those increases in receipts are not due to inflation, because the government expects hardly any at all.

Funny, in the 2012 budget, the government had the following data with only 2010 being a non-estimate:

Notice the big jump from 2011 to 2012 they projected and compare it to the jump from 2011-2012 in the 2013 budget table.  They’re really counting on that surge of receipts, and if they’re off by a year, they’ll just delay the surge another year or so.

Yep, once again, the projected jump from 2010-2011 was far less than actually occurred.

The President’s budget assumes no increase in nominal dollar spending from 2011-2022, interest rates to stay in the 2%-4% range despite needing to borrow around $9 trillion over the next decade, the Fed to not be a major player in buying that debt, because inflation numbers are low, and expects revenues to get a sudden boost, even after being wrong about his revenue predictions over and over again.  And to top it all off, all of these predictions come from a President who has increased the total U.S. debt by over 45% in his first term of office.  Oh, yes we can’t!