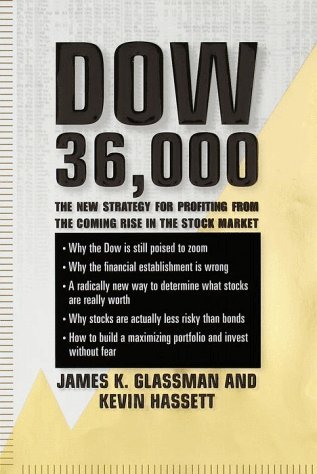 In a testament to just how euphoric stock markets are right now, James K. Glassman the co-author of the fabled Dow 36,000 — a book published in 1999 that claimed that stock prices could hit 36,000 by as soon as  2002 (and which quite understandably is now available for just 1 cent per copy) — has written a new column for Bloomberg View claiming that he might have been right all along:

When we wrote our book, we expected that the stock market, as represented by the 30 blue chips of the Dow, would rise to 36,000 for two reasons.

First, investors had mistakenly judged the risk in stocks to be greater than it really was. Here, we drew from the work of Jeremy Siegel of the Wharton School of the University of Pennsylvania. He showed that, over long periods, stocks were no more volatile, or risky, than bonds.

We saw indications that the risk aversion of investors was declining — as we believed it should. Lower perceived risk would mean higher stock valuation measures: rising price-to- earnings ratios, for instance.

Second, we assumed that real U.S. gross domestic product, the main driver of corporate profit growth, would rise at 2.5 percent a year — a bit below the historic post-World War II rate, but still a decent clip. We warned, however, that small changes in growth rates could have big effects on stock prices.

First, investors have become more frightened of stocks, not less — as reflected in a higher equity risk premium, the excess return that investors demand from stocks over bonds.

These fears may be perfectly reasonable. We wrote our book before the Sept. 11 attacks, the dot-com debacle, the 38 percent decline in stocks in 2008, the “flash crash” of 2010 that sent the Dow down 1,000 points in minutes, the Japanese tsunami and the euro crisis. There’s a good case to be made that, because of the instant interconnections wrought by new technology, unprecedented “black swan” events are increasing and markets are becoming more volatile as a result.

The heightened fears of investors are reflected in lower valuations. Currently, for example, the forward P/E ratio (based on estimated earnings for the next 12 months) of the Standard & Poor’s 500 Index is about 14. In other words, the earnings yield for a stock investment averages 7 percent (1/14), but the yield on a 10-year Treasury bond is only 1.9 percent — a huge gap. Judging from history, you would have to conclude that bonds are vastly overpriced, that stocks are exceptionally cheap or that investors are scared to death for a good reason. Maybe all three.

Explaining why Glassman and Hassett were wrong is simple. They believed that they had found a fundamental truth about how stocks should be valued — that stocks were really less risky than the market perceived them to be — and that the market would correct to meet their beliefs. The problem is that there is no fundamental truth about what stocks are worth. The fundamentals of a company are determined by profit and loss, but the market prices of stocks are created from the meeting of different parties with different subjective beliefs. A buyer of a stock at $10 might believe it will become worth $100, and the seller might believe it is really worth $5. The future performance of that stock will be determined by the future beliefs of market participants in light of the future performance of the firm. Market participants have for some reason always valued equities as a class within a certain P/E range:

With one exception — the peak during which Dow 36,000 was written — equities have traded roughly between 5 and 30 times earnings. That’s a large range.  Glassman and Hassett believed — and subsequently tried to convince markets — that they were pricing equities wrong, and that stocks should be priced at roughly 100 times earnings.  They failed. Markets just wouldn’t go there.

Glassman thinks that Dow 36,000 is attainable with a return to strong growth:

Let’s set investor fears aside for a moment. For investment gains over the long term, there is absolutely no substitute for faster economic growth.

To get it, we need policy changes that will create a better environment for businesses to increase revenue, profits and jobs: a rational tax system that keeps rates low and eliminates special deductions and credits; immigration laws that encourage the best and the brightest to move here and stay; entitlement reform to bring down costs and provide incentives for productive seniors to keep working; sensible environmental, workplace and financial regulation that allows entrepreneurship to thrive; a K-12 education system that boosts student achievement and holds teachers, administrators and politicians accountable …

Chime in and make your own list, because it’s time to focus on what counts in an economy: growth. Even with relatively high risk aversion (let’s say, what we have now), faster growth would significantly increase stock prices.

How fast can the U.S. grow? Four percent is attainable, but I’d settle for 3 percent. Get there quickly, and we’ll get to Dow 36,000 quickly, too.

Back in the real world, we have the opposite problem. Stocks are soaring, on the back of a very weak economy. In fact, the fact that Glassman is being given a platform again to talk about the possibility of huge future stock gains is probably testament to just how overvalued stocks are. The market has more than doubled since the trough in 2009 on the back of the idea that Bernanke will do whatever it takes. But that illusion could easily be shattered, because there are many kinds of negative shocks that central bankers cannot prevent or control. To justify present valuations in the next two years, we would need a significant uptick in American and probably also global growth. Instead we have what may be the biggest housing bubble in history, declining global growth, North Korean threats to start a nuclear war, and so on. And all the while the market is setting new nominal highs.

The uber-optimistic atmosphere permeating much of the financial press is frightening to me. The resurrection of the Dow 36,000 zombie is a symbolically significant event that likely signals much the same thing as it did first time around: a correction.