A 19-year old man was arrested yesterday for the supposed crime of burning a Remembrance Poppy and posting a picture of the incident on Facebook.

A teenager arrested on Remembrance Sunday on suspicion of posting a picture of a burning poppy on Facebook is being questioned by police.

The 19-year-old was held after the image of a poppy being set ablaze by a lighter was reportedly posted online with the caption: “How about that you squadey cunts”.

Police said the man, from Canterbury, Kent, was detained on suspicion of an offence under the Malicious Communications Act after officers were contacted at about 4pm on Sunday.

This is simply dangerous, absurd and Orwellian.

It is just the latest in a succession of police actions against individuals deemed to have caused offence: mocking a collapsed footballer on Twitter; hoping that British service personnel would “die and go to hell”; wearing a T-shirt that celebrated the death of two police officers; making sick jokes on Facebook about a missing child. Each time the police have arrested people for nothing more than expressing an unpopular, outrageous or offensive opinion.

Britain is setting a precedent for trampling all over free speech in the interest of enforcing public morality. Mussolini would be proud.

The point of free speech is not to protect popular speech. It is to protect us from becoming a society where the expression of unpopular, offensive and distasteful ideas is criminalised. That is the surest guard against totalitarian tendencies.

This new incident is particularly bizarre. Children are taught in school that Britain fought the Second World War to defeat fascism. They are taught that the deaths of British soldiers commemorated on Remembrance Sunday were for the cause of freedom, to defeat fascism, to defeat totalitarianism. And now we arrest people merely for making offensive comments and burning symbols?

Are we turning into the thing that we once fought?

What has happened to free speech?

What has happened to Britain?

I am careful what I say on Twitter especially, and the internet in general.

The sad reality is that the internet is not the place for expressing views that you do not want the wider public — including law enforcement and intelligence agencies — to know you hold.

In Britain, a dangerous precedent is being set.

A teenager arrested over a malicious tweet sent to Team GB diver Tom Daley has been issued with a warning.

Dorset Police said the 17-year-old boy was held at a guest house in the Weymouth area on suspicion of malicious communications and later bailed.

After coming fourth in the men’s synchronised 10m platform diving event on Monday, Daley, 18, from Plymouth received a message on Twitter.

It told him he had let down his father Rob, who died in 2011 from cancer. 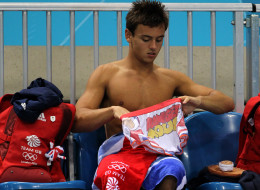 Arrested and cautioned for expressing an opinion. Not for threatening violence. Not even for racial or sexual abuse — as happened in March when a student was convicted of incitement to racial hatred after he tweeted a series of racial slurs.

Just for expressing an opinion that the authorities found to be distasteful.

I admit, it was a distasteful comment. But the idea that the government should arrest the person who made it is far, far, far more distasteful still.

Meanwhile, the number of bankers arrested for rigging LIBOR remains at zero.

This is a very salient example of the problems with the internet in its present state. If the state has the opportunity to gather and index citizens’ thoughts, these cases in Britain — supposedly a free country — illustrate that it is a very short and slippery slope toward the state punishing citizens for expressing their opinions.

While the First Amendment might seem to protect speech, the United States has already got involved in policing expression. And the First Amendment has a massive loophole — it only restricts Congress’ ability to legislate against speech. Other agencies — like the TSA — would seem to be be able to restrict speech under “administrative” grounds (the same rationale they use to gut the Fourth Amendment and search travellers without probable cause).

Holidaymakers have been warned to watch their words after two friends were refused entry to the US on security grounds after a tweet.

Before his trip, Leigh Van Bryan wrote that he was going to “destroy America”.

He insisted he was referring to simply having a good time — but was sent home.

Trade association Abta told the BBC that the case highlighted that holidaymakers should never do anything to raise “concern or suspicion in any way”.

The US Department for Homeland Security picked up Mr Bryan’s messages ahead of his holiday in Los Angeles.

The 26-year-old bar manager wrote a message to a friend on the micro-blogging service, saying: “Free this week, for quick gossip/prep before I go and destroy America.”

US law enforcement represents the overwhelming majority of requests to Twitter for users’ private information.

Law enforcement agencies in the United States are behind the overwhelming majority of requests for Twitter users’ private information, the social media company revealed Monday in its first ever public report on the subject.

Of the 849 total government requests for user information during the period spanning January 1 to June 30 this year, 679 — or 80 percent — took place in the United States, typically for use in criminal investigations, Twitter said.

Japan was in second place after the United States with 98 requests filed by police, followed by 11 requests from law enforcement agencies in the United Kingdom and the same number from agencies in Canada.

Speech on Twitter — and on the internet in general — isn’t free.

UPDATE: It would seem that the arrested party did later make some threats. Whether he was arrested for these or his initial messages remains to be seen — he was cautioned for “malicious communications” which means “causing anxiety or distress”, and so could easily apply to the first tweet — as opposed to intimidation or criminal threatening, which he was not cautioned for.

Obama and Corzine — A Match Made in Heaven?

Now I know that a lot of people on the left — disappointed by his banker-friendly, PATRIOT Act-renewing, indefinite-detention-enabling, American-citizen-assassinating regime — are searching for any reason to vote for him, and plausible reason to defend his record. That’s the nature of tribal politics — “anti-war” Democrats will happily protest the Bush war machine, but they seem quiet when Obama is the one using drone strikes to assassinate American citizens without trial. I don’t like Mitt Romney either, but that’s not the point.

Even for those in favour of gay marriage, let’s not forget that Obama is capable of doing absolutely zero to change the law. Want to introduce a Federal law allowing homosexual couples to marry? Good luck getting it through the Republican Congress.

I’m in favour of consenting adults being able to do whatever they like with each other, but the fact that the current push for gay marriage is supported by Lloyd Blankfein and Goldman Sachs makes me very suspicious (does he want to sell securitised gay marriage debt?).

It just seems like an easy issue for Obama to posture on, while trampling the Constitution into the dirt.

When it comes to civil liberties, Obama has always talked a good game, and then acted more authoritarian than Bush. He talked about an end to the abuses of the Bush years and an open and transparent government, yet extended the Fourth-Amendment-shredding Patriot Act, empowered the TSA to produce naked body scans and engage in humiliatingly sexual pat-downs, signed indefinite detention of American citizens into law, claimed and exercised the power to assassinate American citizens without trial, and aggressively prosecuted whistleblowers. Under his watch the U.S. army even produced a document planning for the reeducation of political activists in internment camps. Reeducation camps? In America? And some on the left are still crowing that talking about being in favour of gay marriage makes him “pro-civil liberties”? Is this a joke?

Here are a few metrics that we should be judging Obama on:

People not in the labour force is spiking:

Meanwhile India, Iran, China, Russia, Saudi Arabia and Japan have all ditched the dollar for other currencies in new bilateral trade agreements — which lest us forget is America’s biggest export, and the product that keeps goods and oil flowing into America. This is an extremely dangerous time. While we cannot lump Obama with the blame for the entire U.S. economic system — the system we have was accumulated via Bush, and Cheney, and Paulson, and Clinton, and Bush, and Reagan, and Carter, and Brzezinski, and Nixon, and Kissinger, and Johnson, and Roosevelt and Wilson and Lincoln and probably most significantly of all the father of central banking Alexander Hamilton — Obama certainly has not improved matters.

And it should be obvious to anyone paying attention that Romney — who claims he would support the NDAA and the PATRIOT Act, that he wants to attack Iran, and has hired many ex-Bush staffers, as well as winning the endorsement of both Jeb and George H.W. Bush, and bizarrely claiming to want to start a trade war with China — is cut from the exact same cloth as Bush and Obama.

This is a dead election. Here’s hoping that Ron Paul — who continues to pick up delegates in the Republican race even while being ignored by the mainstream media who would rather talk about Obama’s posturing on gay rights — can cause some mayhem.