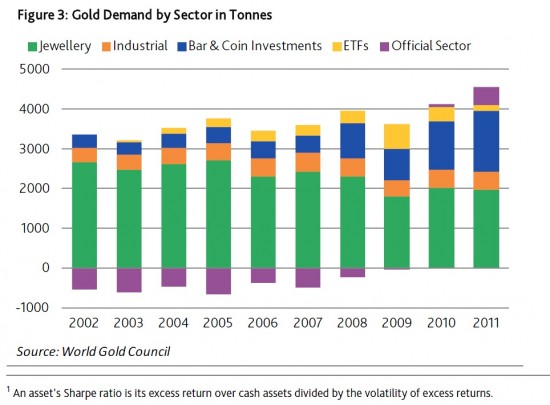 Kaminska seems to believe that gold’s price is not just central-bank supported, but its trajectory is downward:

If not for the gold bar/coin frenzy and ETF demand (now substituted by official buying), one might speculate that the collapse in conventional demand (i.e. for industrial and jewelery purposes) may have led to a very different price path for gold post 2008.

Now that ETF demand is waning, however, marginal support for the gold price is actually being provided by the official sector more than ever.

Though, given the gold price reaction of late, clearly even this is not so effective so, either gold and coin buying has started to wane as well – and there is evidencethat this is the case – or it’s taking ever more buying (by official sources) to keep prices supported at the current level.

The recent plateauing of the gold price thus either suggest that today’s spot supply is increasingly catering to tomorrow’s demand expectations, or in the context of more gold being produced all the time, it is taking ever more buying by the official sector to keep prices from falling.

In other words, sans the intervention of central banks on a major level: case bearish.

The obvious thing, though — even if we take central bank buying out of the equation altogether — is that total demand for gold is still increasing. And the price of gold has increased faster than sales, illustrating that the market has struggled and continues to struggle to keep pace with underlying demand.

And it’s not just demand for gold-denominated paper (i.e. ETFs or other such as-risky-as-anything-you’ll-get-from-MF Global assets) — it’s recently manifested as demand for hard physical gold: 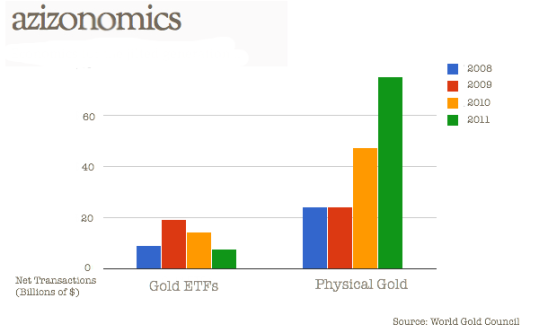 It’s true that central banks are presently supporting the gold price — after years of selling off national wealth at pennies-on-the-dollar into a bear market and thus suppressing prices. Yet it’s not the Western central banks that are pushing demand for gold. It’s the BRICs. As PBOC official Zhang Jianhua noted:

No asset is safe now. The only choice to hedge risks is to hold hard currency — gold.

And as I noted yesterday, BRICs have founded and legitimate fears of buying even deeper into an increasingly ponzified, over-leveraged, rehypothecated and interconnective paper financial system. The PBOC (and other American creditors) already faces the risk of the US Treasury inflating much of their holdings away; the entire point is to get out of such assets into something much harder to duplicate, and impossible to inflate away.

China must make fuller use of the non-financial assets in its foreign reserves, as well as speed up the diversification of investing channels to resist a possible long-term weakening of the dollar.

No; I don’t think it’s particularly wise to announce to the world that you’re going to get elbow-deep into gold bullion either, but this isn’t just a bluff. China is importing hard-to-fathom quantities of gold: 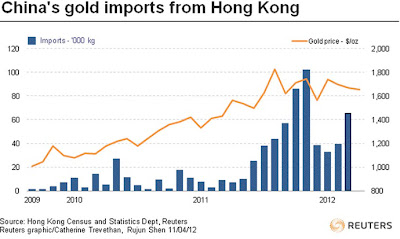 The distrust is not going anywhere because the system is still rotten. We all know — even Business Insider readers know deep down, I think — that there is something exceedingly rotten at the heart of the global financial system. We don’t know quite how rotten, how deep the rabbit hole goes, who will be implicated, or how fast. But with every LIBOR-rigging scandal (which the Fed, of course, was aware of), every raided segregated account, every devalued pension fund, every failed speculative “hedge”, every Facebook or Zynga pump-and-dump, we get closer to the truth.