Tyler Durden pointed out yesterday that just three weeks after Goldman made the case for equities relative to bonds, the muppets who had listened to their advice were getting skewered: 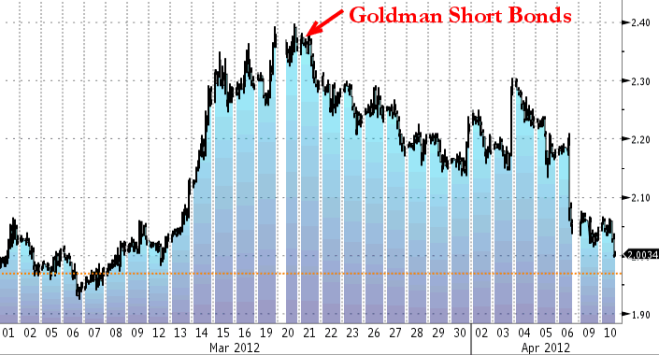 I wrote a while back that (unlike some others) I didn’t believe it was likely that  this was going to be a cataclysmic rate spike. Readers who want to detect one need to watch whether sovereign creditors especially Russia and China are selling, and at what pace — the faster the liquidation, the more rates may spike.

Of course, I am still convinced that the real fragility to America’s economy isn’t actually a rate spike or inflation.The Fed has a very good handle on both of these things (but not, perhaps on unwanted side effects. They can effectively do QE without really inflating the currency much; simply shoot the money to primary dealers for treasuries.

One unwanted side effect could be provoking a damaging trade war with China, from which the West imports so much. That is my pet theory, and one I’ve devoted a few thousand words to over the last few months. But the trouble with side-effects is that it is very hard to tell what the weakest link (i.e. the point that will break) in a volatility-suppressed system is. Tyler Durden reports that systemic financial fragility (as measured by CDS) is at a recent-high, too: 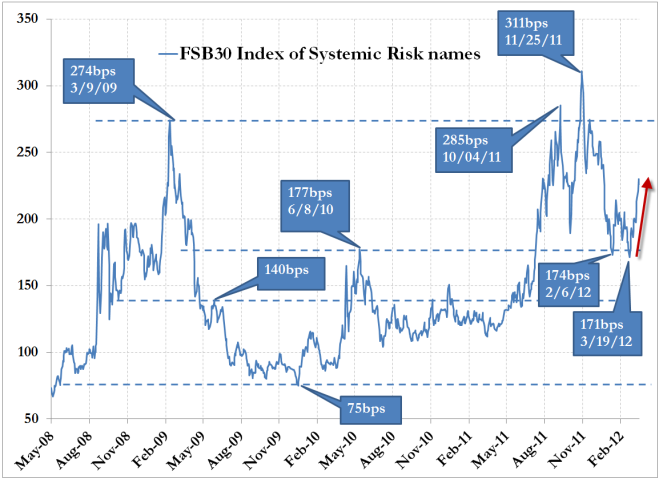 Believers in technical analysis (I am very sceptical) are pointing to a head-and-shoulders top in the “recovery” (to go with the bigger head and shoulders top that is very much one of the stories of the last ten years): 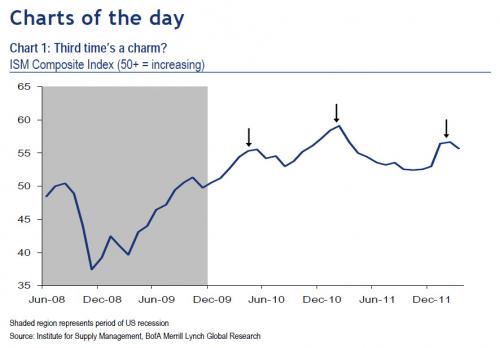 I don’t know when the black swans will come home to roost and the strange creature that we call the present global economic order will go ka-put. I don’t even know if they ever will! But I see the fragilities caused by central planners suppressing the system’s natural volatility.

We’re getting dangerously close to a head and shoulders pattern in both manufacturing output, and the S&P500: 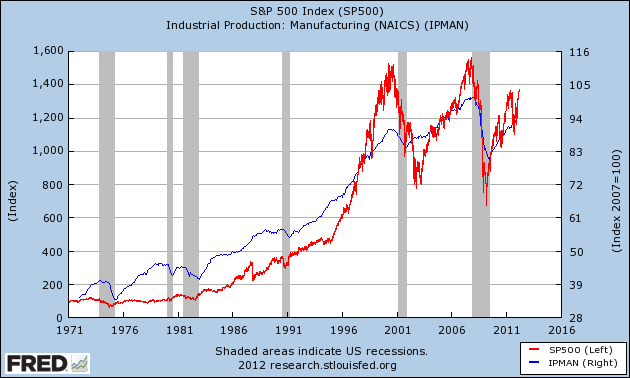 What does this graph tell us? Well in the last ten years we have seen little net gain in either. Each of the two slowdowns has been preceded by a blowout top in the S&P. This is symptomatic of excessive credit creation in the financial sector. The resultant credit crunches coming out of these bubbles would seem to have dampened industrial production. Is that a result of the credit bubble damaging the economy? No; the aftermath of a bubble (so long as it is not accompanied by war, and riots, and famine — in other words, the explicit destruction of capital stock) does not necessarily damage anything other than lending and confidence.

Was it a case then that industrial production — which climbed significantly in the preceding decade — got ahead of itself, and that we were simply producing more than we could consume? It would seem so, and that would certainly explain why the exuberant first attempt to reinflate the bubble failed, and we were drawn into a slump. This brings my thoughts back to this:

Who needs 5 TVs? Well, nobody, and that is the level of consumptive, home-equity-fuelled demand that we were (and are) trying to sustain (and expand upon). For the record, I have 2 TVs, which in itself is probably excessive, especially considering that I rarely watch them.

Then again, there are millions of people in America who need healthcare who aren’t getting it, mostly because (for whatever reason) they can’t afford it. There are homeless kids whose parents have taken to eating rats. Surely that kind of demand would be more sustainable than another speculative stock bubble, another boom in consumption fuelled by home equity, and more TVs, McMansions, iThingies and vacations for urbanites and exurbanites?

I suppose it is that logic that leads well-meaning liberal politicians down the avenues of reflation: economic stimulus, as well as condoning the Fed’s money printing escapades. The problem is that the money always seems to end up in more speculative equity bubbles. I have shown empirically that the more money America has printed (both in terms of expanding the monetary base as well as in terms of fractional credit creation), the more unequal America has become.

This graph highlights the real outcome of all the Obama-Bush-Bernanke economic interventionism: 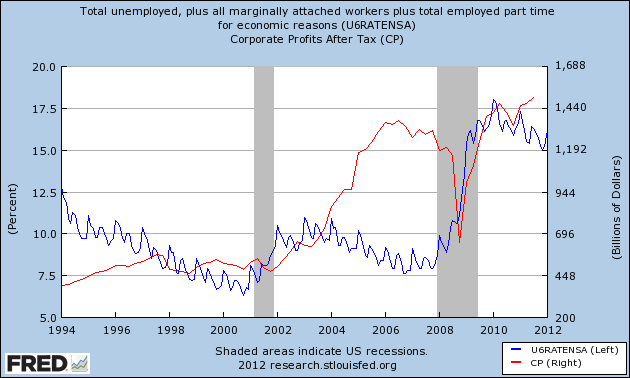 Corporate profits bounced back right away, while unemployment and underemployment are just as high as when the contraction “finished”. I have made a habit while writing this blog of badmouthing John Maynard Keynes, but at least under a genuinely Keynesian scheme the unemployed people are given jobs (albeit on borrowed money, and albeit not necessarily productive ones) and the unemployment rate falls. All we get today is platitudes about the unemployment rate being sticky; more hopium, more promises that if we just wait long enough and hope hard enough things will get better.

So all that the Obama-Bush-Bernanke interventionism has really produced is more slush for the corporatocracy. It’s just corporate socialism hidden behind a facade of pithy egalitarianism. There is no recovery, only superficial reflation bubbling over a stew of hurt.

And — like most head and shoulders patterns — this third top is even more unsustainable than the last two. 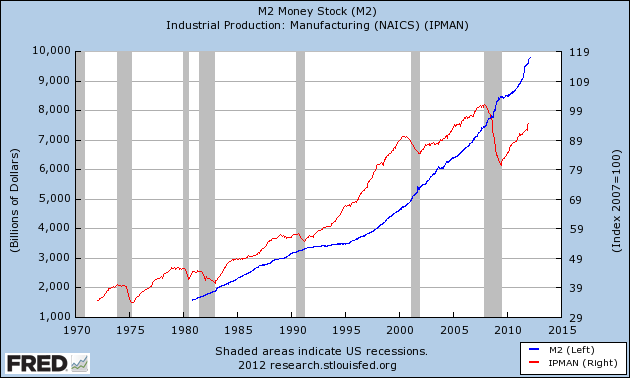 Credit creation has continued to expand above and beyond the productive capacity of the economy. That is a bubble, if ever I saw one.

So what next? Well — like most head and shoulder patterns — the final “shoulder” tends to be followed by a crash. Now, I recognise we are not dealing with an equity, so the crash may not be in terms of price level. It may be geopolitical, or inflationary, or ecological, or some black swan. It may be this year (moderately unlikely, but plausible) or sometime down the line. Who knows?

Hold onto your seats.