Robert Reich claims that only government can get America out of the mess it is in. He’s wrong.

America’s ongoing jobs depression – which is what it deserves to be called – is the worst economic calamity to hit this nation since the Great Depression. It’s also terrible news for President Obama, whose chances for re-election now depend almost entirely on the Republican party putting up someone so vacuous and extremist that the nation rallies to Obama regardless.

The problem is on the demand side. Consumers (whose spending is 70% of the economy) can’t boost the American economy on their own. They’re still too burdened by debt, especially on homes that are worth less than their mortgages. In addition, their jobs are disappearing, their pay is dropping, their medical bills are soaring.

Businesses, for their part, won’t hire without more sales. So we’re in a vicious cycle. The question is what to do about it.

When consumers and businesses can’t boost the economy on their own, the responsibility must fall to the purchaser of last resort. As John Maynard Keynes informed us 75 years ago, that purchaser is the government.

Government can hire people directly to maintain the nation’s parks and playgrounds and to help in schools and hospitals. It can funnel money to help cash-starved states and local government so they don’t have to continue to slash payrolls and public services. And it can hire indirectly – contracting with companies to build schools, revamp public transportation and rebuild the nation’s crumbling highways, bridges and ports.

Look at the fact that each job created costs $250,000 — money which use be taken from the productive apparatus of the economy and spent on projects which may or may not be helpful overall.

Look at the humungous cost of the wars and the corporate bailouts — all of which has to be taxed from the productive economy.

Here’s the reality. The more government spends, the higher the unemployment rate goes: 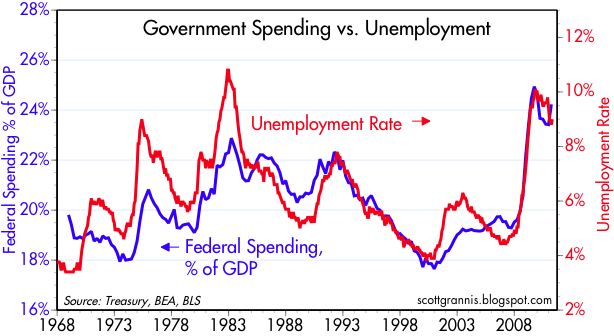 The way to create jobs in America is to end the corporate bailouts, end the crony capitalism, end the wars and give the money back to the American people. That would create a new wave of job-creating small businesses, raise demand, raise the ability of the poor and middle classes to pay for that demand, and (with the current tax load, but without the burden of the huge military spending) generate enough revenue to start paying down the humungous debt load.