One thing that has undergone hyperinflation in recent years is the length of financial regulations: 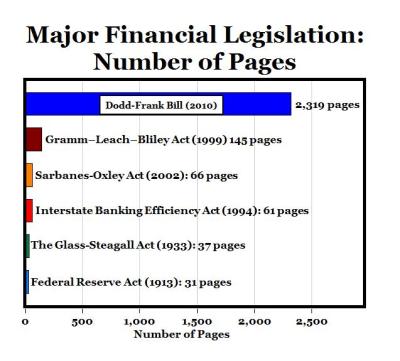 The Dodd-Frank regulatory hyperinflation crowds out those who cannot afford teams of legal counsel, compliance officers, and expansive litigation. Dodd-Frank creates new overheads which are no challenge for large hedge funds and megabanks armed with Fed liquidity, but a massive challenge for startups and smaller players with more limited resources.

As BusinessWeek noted in October:

So, is this expansion in volume likely to improve financial stability? No — the big banks are bigger and more interconnected than ever, which was precisely the problem before 2008, and they are still speculating and arbitraging with very fragile strategies that can incur massive losses as MF Global’s breakdown and more recently the London Whale episode proves.

Andy Haldane laid out the problem perfectly in his recent paper The Dog and the Frisbee:

Catching a frisbee is difficult. Doing so successfully requires the catcher to weigh a complex array of physical and atmospheric factors, among them wind speed and frisbee rotation. Were a physicist to write down frisbee-catching as an optimal control problem, they would need to understand and apply Newton’s Law of Gravity.

Yet despite this complexity, catching a frisbee is remarkably common. Casual empiricism reveals that it is not an activity only undertaken by those with a Doctorate in physics. It is a task that an average dog can master. Indeed some, such as border collies, are better at frisbee-catching than humans.

So what is the secret of the dog’s success? The answer, as in many other areas of complex decision-making, is simple. Or rather, it is to keep it simple. For studies have shown that the
frisbee-catching dog follows the simplest of rules of thumb: run at a speed so that the angle of gaze to the frisbee remains roughly constant. Humans follow an identical rule of thumb.

Catching a crisis, like catching a frisbee, is difficult. Doing so requires the regulator to weigh a complex array of financial and psychological factors, among them innovation and risk appetite. Were an economist to write down crisis-catching as an optimal control problem, they would probably have to ask a physicist for help.

Yet despite this complexity, efforts to catch the crisis frisbee have continued to escalate. Casual empiricism reveals an ever-growing number of regulators, some with a Doctorate in physics. Ever-larger litters have not, however, obviously improved watchdogs’ frisbee-catching abilities. No regulator had the foresight to predict the financial crisis, although some have since exhibited supernatural powers of hindsight.

So what is the secret of the watchdogs’ failure? The answer is simple. Or rather, it is complexity.

Big, messy legislation leaves legal loopholes that clever and highly-paid lawyers and (non-) compliance officers can cut through. Bigger and more extensive regulation can make a system less well-regulated. I propose that this is what the big banks will use Dodd-Frank to accomplish.

I predict that the regulatory hyperinflation will make the financial industry and the wider economy much more fragile.

The whole world knows the name Gavrilo Princip, and that of he man he assassinated, Archduke Franz Ferdinand. Princip’s shot triggered the Austro-Hungarian invasion of Serbia that set in motion the chain of events leading to the Great War of 1914. 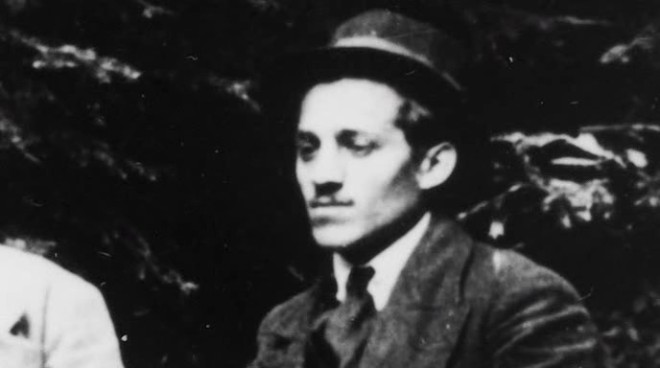 After Serbia appealed to Russia for help, Russia began moving towards mobilization of its army, believing that Germany was using the crisis as an excuse to launch war in the Balkans. Upon hearing news of Russia’s general mobilization, Germany declared war on Russia. The German army then launched its attack on Russia’s ally, France, through Belgium, violating Belgian neutrality and bringing Great Britain into the war as well.

Is it possible that a similar chain of events may have already begun unfurling with the Syrian downing of a Turkish F-4 fighter jet? Turkey have already invoked a full meeting of NATO,  claimed that Syria have fired on a second Turkish plane, and vowed that Syria’s actions “won’t go unpunished”. 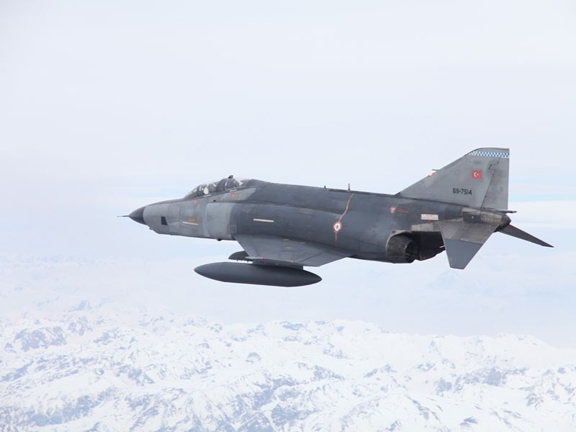 The vast and sprawling system of national alliances that existed prior to the events 1914 were considered by policy makers of the time to be a counterbalance against excessive tension and the threat of war. The great powers created alliances ostensibly for the purpose of deterring war. The dominant view was that the potential for dragging in allies reduced the chances of an attack. In reality, it just meant that one spark could set the entire world aflame.

This is functionally the same as the interconnecting mesh of derivatives and shadow intermediation that foreshadowed the crash of 2008. As financial parties sold each other more and more “hedges“, the consensus of the time was that this made the system safer, as it allowed risk to be dissipated around the system. The theory was — and there were plenty of inaccurate mathematical models to back this up — that spreading risk around the system made the financial system safer. As it turned out, it didn’t. In the wake of MF Global and the London Whale, we know that the financial system has not learned the lessons of 2008. But it seems even more absurd that the diplomatic system has not really learned the lessons of 1914.

The NATO system — set up to oppose the Warsaw Pact system, which no longer exists — functions the same way — rather than dissipating risk, it allows for the magnification of international tensions into full-on regional and global wars. In the late 20th century the threat of nuclear war proved a highly-effective deterrent which limited the potential for all-out-war between the great powers, offsetting much of the risk of the hyper-fragile treaty system. Yet the potential for magnifying small regional problems into bigger wars will continue to exist for as long as NATO and similar organisations prevail.

We do not know exactly what arrangements Syria has with Russia and China — there is no formal defensive pact in place (although there is one between Syria and Iran) though it is fair to assume that Russia will be keen to maintain its Syrian naval assets, a view which is supported by the fact Russia heavily subsidises the Syrian military, and has blocked all the UN-led efforts toward intervention in Syria.