Tyler Durden of Zero Hedge claims that any taper in QE will be a response to the collateral shortage — the fact that quantitative easing has stripped an important part of the market’s collateral base for rehypothecation out of the market. With less collateral in the market, there is less of a base for credit creation. The implication here is that quantitative easing is tightening rather than easing credit conditions. The evidence? Breakdown in the Treasuries market resulting in soaring fails-to-deliver and fails-to-receive: 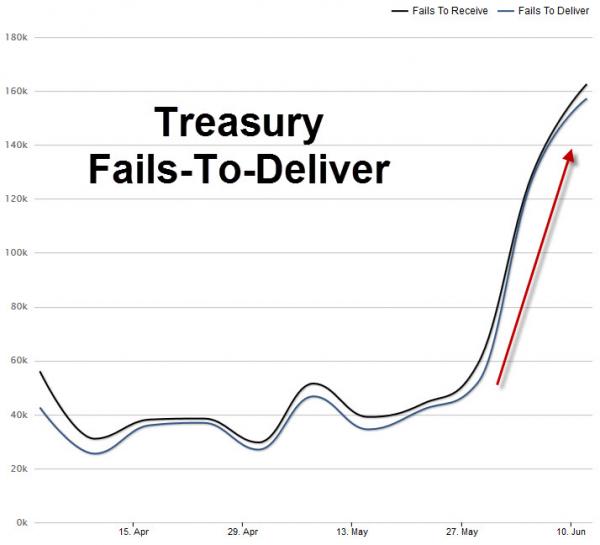 I don’t disagree with this. The ultra-low rate environment (that is still an ultra-low rate environment in spite of the small spike in Treasuries since murmurs of the taper began) on everything from Treasuries to junk bonds is symptomatic of a collateral shortage. Quantitative easing may ease the base money supply (as an anti-deflationary response to the ongoing deflation of the shadow money supply since 2008), but it tightens the supply of collateral.

The evidence on this is clear — expanding government deficits post-2008 did not bridge the gap in securities issuance that the financial crisis and central bank interventions created:

The obvious point, at least to me, is that it seems easier and certainly less Rube Goldberg-esque to fight the collateral shortage by running bigger Federal deficits until private market securities issuance can take its place. Unfortunately quantitative easing itself is something of a Rube Goldberg machine with an extremely convoluted transmission mechanism, and fiscal policy is not part of the Fed’s mandate.

Here are the broadest measures of the US money supply, M3 and M4 as estimated by the Center for Fiscal Stability:

With the total money supply still at an absolute level lower than its 2008 peak, it is obvious that the Federal Reserve in tripling the monetary base — an expansion by what is in comparison to other components of M4 a relatively small amount — has been battling staggering deflationary forces. And with the money supply still lower than the 2008 peak and far-below its pre-2008 trend, the Fed is arguably struggling in this battle (even though by the most widely-recognised measure, the CPI-U the Fed has kept the US economy out of deflation).

What does this imply? Well, either the monetary transmission mechanism is broken, or monetary policy at the zero bound is ineffectual.

What it also implies is that hyperinflation (and even high inflation) remains the remotest of remote possibilities in the short and medium terms. The overwhelming trend remains deflationary following the bursting of the shadow intermediation bubble in 2008, and to offset this powerful deflationary trend the Fed is highly likely to have to continue to prime the monetary pump Abenomics-style into the foreseeable future.

It depends how you define money.

The Federal Reserve controls the monetary base, and has vastly increased it as a result of quantitative easing:

This means that while the monetary base has tripled, the money supply (M1) has not surged nearly as much:

But there is a much bigger factor here; M1 only deals with the obvious side of money supply — lending by financial institutions to businesses and consumers. There exists another banking system between banks and hedge funds where credit expansion takes places much less directly and obviously, via securitisation and rehypothecation — for example collateralised-debt-obligations (CDO), mortgage-backed-securities (MBS), etc. Here’s a recent chart of credit creation via these pseudo-monies:

Simply, the Fed’s huge expansion of the monetary base has still failed to prevent the contraction of this strange and exotic part of the “money” supply stemming from the 2008 Lehman incident, and surely to be significantly worsened by the ongoing implosion in Europe. It has failed to prevent the sector from deflating and sucking down the wider economy.

In the years preceding 2008 the definition of “money” became extremely loose. When securities made up of sub-prime mortgages which are in arrears comes to pass for “money” — and came to stand on balance sheets as debt — it should have been painfully obvious that modern finance had mutated into an uncontrollable monster, and that no amount of quantitative easing could prevent prevent the inevitable credit contraction from blown-up asset prices tanking.

The shadow banking sector was never “too big to fail”; it was too monstrous to succeed.

END_OF_DOCUMENT_TOKEN_TO_BE_REPLACED

Ben Bernanke, and the Keynesians were right: Quantitative Easing has not caused the kind of inflation that the non-mainstream Austrian economists claimed that it would. The theory was that a soaring monetary base, and the zero-interest-rate-policy would lead to easy money flowing like a tsunami, and creating such a gush that inflation on goods and services — the change in cost from month-to-month and year-to-year — would soar, making daily life impossible for those on fixed incomes, and in a worst-case-scenario — like Zimbabwe, or Weimar Germany — forcing consumers to use an armful or wheelbarrow of cash to purchase a loaf of bread. Let’s look at the monetary base:

That is a huge spike!The monetary base — also known as M0 — is the total amount of coins, paper and bank deposits in the economy. Quantitative easing injects new money into the monetary base, and as we can see above, has great increased it. So why can I still buy bread without a wheelbarrow? That is because the monetary base and the money supply are two different things. In a fractional-reserve banking system, deposits in banks can be lent, re-deposited, and lent again. Government policy determines the number of times that money can be lent — in the United States, total credit cannot exceed lending by more than ten times. The money supply — which accounts for fractional reserve lending — is known as M2. Let’s look at it: