If one thing has changed in the last one hundred years in economics it has been the huge outgrowth in the usage of mathematics: 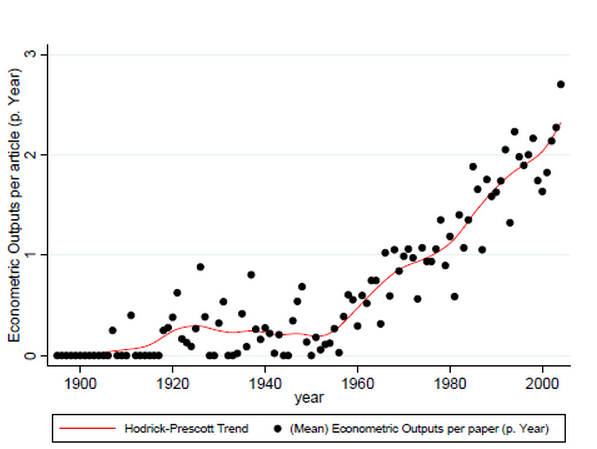 This is largely a bad development, for a number of reasons.

First of all layers of mathematics acts as a barrier to public understanding. While mathematics is a useful language for communicating complex ideas, those without training in mathematics will struggle to grasp what an author is trying to communicate if a paper consists mostly of equations untranslated into English. This is bad practice; it is easier to baffle with bullshit in an unfamiliar language than it is in plain English.

Third, attempting to smudge the human reality of economics into cold mathematical shackles is degenerative. Economics is a human subject. Human behaviour is not mechanical, it is not mechanistic. Physicists can very accurately model the trajectories of rocks in space. But economists cannot accurately model the trajectories of prices, employment and interest rates down on the rocky ground.

Economics would benefit from self-restraint in regard to the usage of mathematics. Alfred Marshall made some useful suggestions:

I hope the blowout growth in mathematics in economics is a bubble that soon bursts.