It is hard enough to determine what, when and how to invest even with solid data. We live in an unpredictable and chaotic world, and the last thing that investors need is misinformation and distortions. That is why the LIBOR manipulation scandal is so infuriating; as banks skewed the figures, they skewed entire marketplaces. The level of economic distortion is incalculable — as LIBOR is used to price hundreds of trillions of assets, the effects cascaded across the entire financial system and the wider world. An unquantifiable number of good trades were made bad, and vice verse. Yet in truth we should not expect anything else from a self-reported system like LIBOR. Without real checks and balances to make sure that the data is sturdy, data should be treated as completely unreliable.

Unsurprisingly, it is emerging that many more self-reported figures may have been skewed by self-reporting bullshittery.

The Libor scandal could be repeated in a number of other “self-certifying” markets where prices are determined, he said

“Self-certification is clearly open to abuse, so this could occur elsewhere,” he said.

A Financial Services Authority inquiry into Libor should be extended to other self-certifying markets, he said. The Treasury said last night that the review, led by Martin Wheatley, was free to examine markets other than Libor.

An expansion of the FSA review could take in a number of other interest-rate-related data as well as some complex financial instruments measuring the difference between banks’ borrowing costs and that of the US government.[i.e. the Ted spread]. Some markets in gold and oil are also based on self-certification.

This all reminds me of this:

When humans have an incentive to exaggerate or lie — either to bolster their ego by lying about penis size, or to cream an easy profit by rigging rates — it seems they have a propensity to do so.

Hopefully there will be one beneficial side-effect of the LIBOR rigging — self-reporting will die. It seems inevitable that market participants will pay a premium for solid, independent data. But sadly, any auditor can be bribed. And in a generation’s time, the LIBOR-rigging scandal of 2008 (and probably much earlier) may just be an antique detail known to only a savvy few. Scepticism, caution and portfolio robustification will always remain essential tools for savvy investors who don’t want to lose their shirt and shoes.

It was scepticism that was the difference between economists who refused to buy into the notion of Soviet prosperity in spite of impressive (and entirely self-reported) figures emerging from the Soviet Union, and those Western economists like Paul Samuelson (perhaps spurred on by ideological fervour) who predicted again and again in textbooks spanning thirty years that the USSR would overtake the USA in GDP: 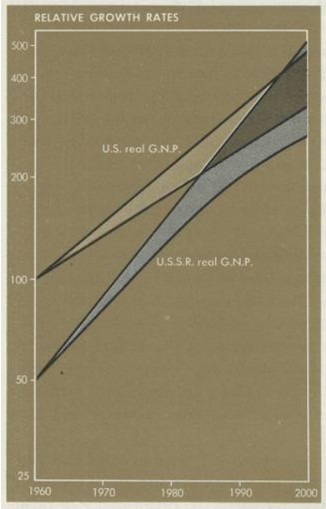 In the 1961 edition of his famous textbook of economic principles, Paul Samuelson wrote that GNP in the Soviet Union was about half that in the United States but the Soviet Union was growing faster.  As a result, one could comfortably forecast that Soviet GNP would exceed that of the United States by as early as 1984 or perhaps by as late as 1997 and in any event Soviet GNP would greatly catch-up to U.S. GNP.  A poor forecast — but it gets worse because in subsequent editions Samuelson presented the same analysis again and again except the overtaking time was always pushed further into the future so by 1980 the dates were 2002 to 2012.  In subsequent editions, Samuelson provided no acknowledgment of his past failure to predict and little commentary beyond remarks about “bad weather” in the Soviet Union.

The reason for his prediction? Apparently, bad data.

To his credit Samuelson was always fairly open about it when his predictions failed to come true, stating that he was using the best data available at the time and he changed his mind as the evidence changed. I’d argue that in some cases, especially concerning evidence coming out of the Soviet Union, he possibly should have been a bit more sceptical as to its accuracy, however almost everyone in economics is guilty of that.

One can only wonder how bad the state of misreporting, fraud and delusion is in the various economies where central planning plays an even larger role than here in the West.