Often, when I talk about inflation being low, people who disagree tend to cite John Williams’ Shadowstats as evidence that price inflation is not low at all.

Now, I don’t disagree with the idea that some people have experienced a higher level of price inflation than the CPI. Everyone experiences a different rate of inflation based on their purchasing habits, so by definition everyone’s individual rate will diverge from the official rate to some degree; some will be higher, and some will be lower. And I don’t disagree that rising food and fuel prices have been a problem for welfare recipients and seniors on a fixed income, etc, who spend a higher proportion of their income on food and fuel than, say, young professionals with a lot of disposable income.

This should be obvious from their data, which has the exact same curve as the CPI data at a higher level:

In fact, according to James Hamilton of Econbrowser, John Williams admitted in 2008 that his numbers are just inflated CPI data:

Last month I called attention to an analysis by BLS researchers John Greenlees and Robert McClelland of some of the claims by John Williams of Shadowstats about the consequences for reported inflation of assorted technical decisions made by the BLS. Williams asked me to update with a link to his response to the BLS study. I am happy to do so, along with offering some further observations of my own.

You can follow the link to Shadowstats’ response to Greenlees and McClelland and judge for yourself, but my impression is that the response is more philosophical than quantitative. In a separate phone conversation, Williams further clarified the Shadowstats methodology. Here’s what John said to me: “I’m not going back and recalculating the CPI. All I’m doing is going back to the government’s estimates of what the effect would be and using that as an ad factor to the reported statistics.”

Price changes and inflation are important topics, and constructing alternate measures of inflation is a worthwhile activity. Researchers at MIT have tried to do this with their Billion Prices Project, which measures price trends across a much, much larger range of products and locations than CPI: 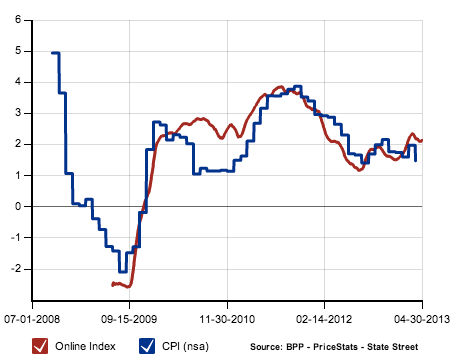 What the Billion Prices Project implies for Shadowstats is that the CPI is roughly correct, and there is no vast divergence between real-world price trends and the CPI number. Of course, maybe the 1980s and 1990s methodology would be different from the current numbers. It would be very interesting to compare the current CPI methodology with the older CPI methodologies and with the BPP data! But assessing this empirically would require someone to mine through the raw CPI data since the 1980s and recalculate the outputs with the real earlier methodology — a far longer, more difficult and sophisticated process than taking the CPI outputs and adding an arbitrary constant!