After all the promises from both Obama and Congressional leaders that indefinite detention for Americans would not be written into law, the 2013 National Defense Authorization Act contains exactly that.

What can we conclude from that? That both the executive branch including Barack Obama, Janet Napolitano and Eric Holder and majority elements of the legislative branch — the Senate voted 81-14, and the House voted 305-107 — want the power to detain Americans indefinitely without charge or trial. And why would they want the power if they didn’t intend to use it?

The now-infamous NDAA for fiscal year 2012, passed last year, granted the president the authority to indefinitely detain American citizens without charge, without access to an attorney, and without trial. It is difficult to imagine anything more un-American than this attack on our Constitutional protections. While we may not have yet seen the widespread use of this unspeakably evil measure, a wider application of this “authority” may only be a matter of time.

Historically these kinds of measures have been used to bolster state power at the expense of unpopular scapegoats. The Jewish citizens of 1930s Germany knew all about this reprehensible practice. Lately the scapegoats have been mostly Muslims. Hundreds, perhaps many more, even Americans, have been held by the US at Guantanamo and in other secret prisons around the world.

And children of those indefinitely detained during World War 2 have launched a legal challenge to the status quo:

The children of Japanese-Americans whose internment during World War II was upheld by the infamous Supreme Court ruling Korematsu v. United States are stepping into a new legal battle over whether the military can indefinitely detain American citizens.

Writing that their parents “experienced first-hand the injustice resulting from a lack of searching judicial scrutiny,” the children of Fred Korematsu and other Japanese-Americans who were interned filed a brief on Monday in support of a lawsuit against the National Defense Authorization Act of 2012. Critics say the law allows the military to lock Americans away without trial merely on suspicion of support for terrorist organizations.

“During WWII, President Roosevelt essentially issued the military a ‘blank check,'” Korematsu’s children wrote in a friend-of-the-court brief. The military’s orders, “to which the Court uncritically deferred, culminated in the internment. In reviewing the NDAA’s new detention provision, the courts cannot afford to mimic the wartime Supreme Court’s failure.”

Then, America was at war with nations. Once a peace treaty was signed, the vile, racist detention ended. But for those detained under an accusation of being a part of decentralised groups like al-Qaeda, or Wikileaks, or Anonymous there are no peace treaties, no definite end to hostilities.

And while the judiciary has so far thrown out indefinite detention as unconstitutional under the Fifth Amendment, this has not stopped the legislative and executive branches of government from bulldozing on. Obama, the “constitutional scholar” defends the principle of the indefinite detention of Americans. The neocon triumvirate of Lindsey Graham, John McCain and Joe Lieberman continue to demand it.

This is terrible. If evidence exists of lawbreaking, suspects can be charged and tried. If the government has no evidence that can stand up in court, it shouldn’t be in the business of detaining anyone.

Today the detained may be those accused of being members of al-Qaeda, Wikileaks, or Anonymous. Tomorrow, who knows who might find themselves in the crosshairs of indefinite detention — journalists, whistleblowers, dissidents. As Naomi Wolf noted when Judge Katherine Forrest first struck down indefinite detention:

Forrest asked repeatedly, in a variety of different ways, for the government attorneys to give her some assurance that the wording of section 1021 could not be used to arrest and detain people like the plaintiffs. Finally she asked for assurance that it could not be used to sweep up a hypothetical peaceful best-selling nonfiction writer who had written a hypothetical book criticizing US foreign policy, along lines that the Taliban might agree with. Again and again the two lawyers said directly that they could not, or would not, give her those assurances. In other words, this back-and-forth confirmed what people such as Glenn Greenwald, the Bill of Rights Defense Committee, the ACLU and others have been shouting about since January: the section was knowingly written in order to give the president these powers; and his lawyers were sent into that courtroom precisely to defeat the effort to challenge them. Forrest concluded: ”At the hearing on this motion, the government was unwilling or unable to state that these plaintiffs would not be subject to indefinite detention under [section] 1021. Plaintiffs are therefore at risk of detention, of losing their liberty, potentially for many years.“

Obama has always claimed to want to spread the wealth around. Yet, as I stressed this June (and in my first ever blog post way back in July 2011!) that’s the exact opposite of what he has achieved.

And it’s getting worse, not better. 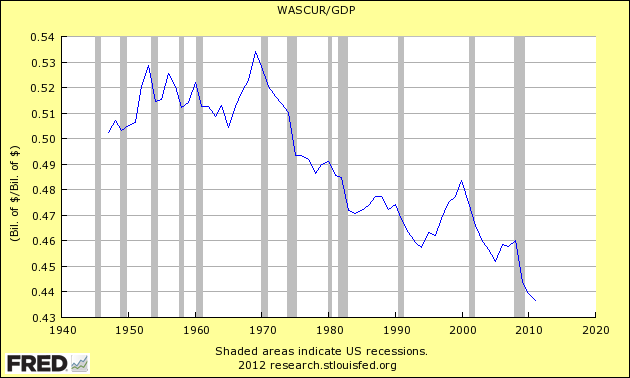 Obama might throw a lot of rhetoric about fighting for the middle class.

But the reality has been the opposite. America today is all about the enrichment of big banks, financial corporations and the military-industrial complex, while the working class has rotted.

The truth of Obama’s policies (and successive administrations prior to Obama) is more concentrated wealth within the financial elites and Wall Street. Banks get bailed out. Campaign donors get stimulus money. And the middle class and future generations pay for it in taxation and the Cantillon Effect.

The Obama reinflation is a rotten bubble built on rotten foundations. Trying to reinflate the economy from a starting debt ratio of over 350% of GDP through crony corporatism and helicopter drops to the rich is an absurd notion that is doomed to abject failure.

And the growing gap between the rich and the poor is steadily beginning to resemble neofeudalism.