James Rickards and Max Keiser suggest one of the logical conclusions of the Italian-debt blowup is that Italian gold will be auctioned off, perhaps to China:

With Italian external debt standing at $2.2 trillion, and Italy’s 2,400 tonne gold holdings worth only $137 billion, gold would have to rise pretty significantly for that option to come into play.

Of course, these figures ram home the idea that gold is significantly undervalued relative to current credit/debt levels. America’s external debt stands at $14.3 trillion, yet its gold reserves are worth just less than $500 billion.

Officially, gold is not money. Officially, levels of debt should have no tie to gold reserves (i.e., the ability to pay in the 6,000-year old store of value).

But with the current malfunction in the global economic system, which soon may have to deal with the consequences of Euro breakdown, or an oil shock, or a new middle eastern war, it is perfectly plausible (or even likely) that the newer fiat monetary systems — all of which are subject to counter-party risk — will crumple, and bring the old currency — gold — back into play.

While a chance of systemic collapse remains, nobody will be keen to see their gold reserves sold off. Nations with less gold than their rivals — particularly China who have recently shown particular interest in converting their FX hoard into gold — will be keen to see the system live on for as long as possible (to cash out into physical assets and gold).

And that is the fundamental contention — the Eurozone wants to keep its gold, but fear the catastrophic impact of Euro-breakdown — and the Chinese want to keep the system going while slowly accumulating gold.

I can see that there is quite a lot of scope for a middle ground. The real question is how much would a Sino-European bailout-for-gold deal cause gold to spike… 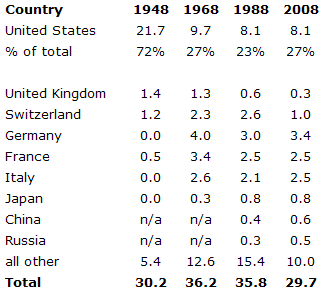