I wondered during the final debate whether Mitt Romney might steal a phrase from Ronald Reagan and ask Americans if they were better off than they were four years ago. It has worked for the Republicans before, and all the polling data pointed to the idea that voters were looking at the economy as the top issue.

Yet Romney did no such thing. Perhaps that was because by a number of significant measures, many Americans are better off than they were three or four years ago when America was mired in the epicentre of a global economic crisis. While America is in many cases just catching up to ground lost in the 2008 crash, and while many significant and real doubts remain about the underlying fundamentals of the American and global economies, the American economy has reinflated since early 2009.

Real GDP growth has been sustained:

So has industrial production:

And total wages and salaries:

And although total employment remains significantly depressed, headline unemployment has fallen (and those who have dropped out of the labour force have been entitled to expanded welfare programs):

It seems — although this was a very divided election — that these data provided enough juice to give just enough Americans the sense that although they may not be better off than they were at the turn of the millennium, under Obama things are improving just enough.

Certainly, some groups who have not fared well due to low interest rates such as seniors rejected Obama, too. Other groups, like women, deserted the Republicans on social issues. Yet Republicans looking for reasons why Romney ultimately lost probably need look no further than slow but steady reinflation.

Beneath the surface, this tepid reinflation is very much akin to the economy that got Bush re-elected in 2004. That recovery ended in mania and a bubble and finally a crash when subprime imploded in 2008. It is more than possible that this recovery is equally unsustainable and will end the same way, in crushing disappointment and grinding deflation.

Debt — the fuel of bubbles — is slowly growing again, from a perilously high starting point: 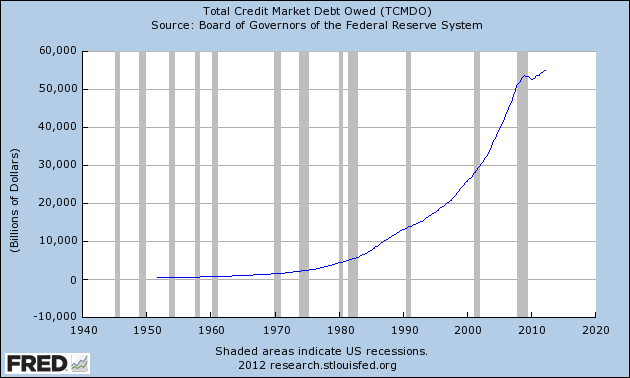 Deleveraging in the new quantitatively-eased environment has been very, very slow. This is a delicate and dangerous balancing act. Total debt levels as a percentage of the economy remain humungous and are a grinding weight on the underlying economy:

The Obama-Bernanke reinflation may well be an illusion built on the shakiest of foundations. And it may end more painfully than even the disastrous Bush-Greenspan reinflation. Yet it was enough to guarantee Obama re-election.