So Greece has been “rescued”. 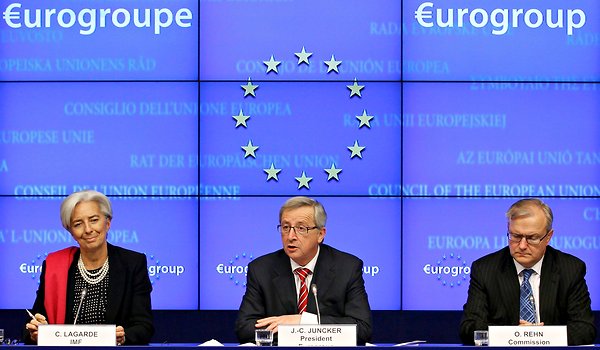 What we had overnight is an agreement in principle, not a final definitive rescue of Greece. Before we crack open the vintage Ouzo, let’s just see how it goes down with the relevant private-sector lenders, politicians in the only creditor country that really matters — Germany — and Greek citizens.

That “agreement in principle”?

The deeper truth emerges from the BBC:

“The funds that are coming in are not staying in Greece, are not being invested in Greece, are not here to help the Greeks get out of this crisis,” Constantine Michalos, president of the Athens Chamber of Commerce and Industry, told the BBC.

“It’s simply to repay the banks, so that they can retain their balance sheets on the profit side.”

This reminds me of a comment made by Andrei Canciu yesterday:

I think that even the original (i.e. current) architecture of the Euro would have been workable if it were not for the “innovations” in the banking system during the last 10 years. That is, overindebtedness would have always been solved through defaults by punishing the the irresponsible lenders (i.e. those tight spreads between Northern and Southern European countries), while the defaulting countries would have gotten some post-default aid.

I read somewhere that a Greek default would have been totally manageable 10 years ago. That’s no longer the case with the shadow banking system and the incomprehensible web of derivatives.

And there we have our problem: this isn’t really about Greece at all. It’s about the fundamentally perverse nature of the global economic system that cannot withstand a default or liquidation without bringing down the entire system. Even if China and Japan threw all their FX reserves into bailing out the Eurozone this would merely postpone the systemic breakdown. Because, the problem is the system. The global economic system needs to be able to withstand defaults, liquidations, crises. It needs to be robust. And the Byzantine workings of the shadow banking system — where everyone owes money to everyone else, and if one falls they all fall — is a hyper-fragile juggernaut that is bound to come down eventually. If it’s not Greece it will be something else. And that will be a good thing — because we will be abe to switch to an economic system less prone to absurd bubbles, hyper-fragility, and forced bailouts.

Anyway, I am still virtually certain that this bailout is a total sham, and — even if stomached by Germany and international creditors — is doomed to abject failure.

It’s demanding even greater and deeper austerity from an already-bleeding Greek nation. As I’ve said before, austerity in a depressed economy usually results in larger budget deficits as a result of falling tax revenues. Simply, this medicine is poison. Very shortly, Greece may well be back in the hole.

It seems only a few days ago that I was explaining why China was not going to save the PIGS’ bacon — if they want to invest in Europe they can wait until the situation severely deteriorates to get more bang for their buck.

Perhaps the most important cause of our economic malaise is that for years as a nation we have been living beyond our means, in deficit with the rest of the world, buying from other countries far more than we produce, till our indebtedness became unsustainable.

By contrast China has been consuming far less than it produces, accumulating vast surpluses.

So as we work down our debts, the hope of the government has been that the Chinese could be persuaded to invest some of their vast surpluses in our infrastructure, in a way that would ease the pain of our economic slowdown and would yield a decent return to China over the long term.

That’s why the Chancellor of the Exchequer was today so delighted that China’s sovereign wealth fund, China Investment Corporation, which controls more than £250bn – has bought a stake of almost 9 per cent in London’s water and sewage business, Thames Water.

Britain has been happily munching on that Chinese-manufactured free lunch of consumer goods and cheap labour, but now she wants to enjoy the benefits of China’s years of thrift and productivity by having China pay for infrastructural improvements.

The first thing to note is that selling equity seems much better than selling debt. A lot of Chinese resentment toward America stems from America’s protectionist attitude to its economy — America won’t let China freely acquire equities with their surplus dollars. Debt — especially debt that gets paid with newly-printed money — creates a relationship of mutual antagonism. Creditors and debtors have a history of trying to screw one another. Equity — i.e., Chinese ownership — gives more of a shared incentive for success.

The second thing to note is that China may still be reluctant to invest now. With Britain holding a huge debt bomb — and looking at a future of excruciating deleveraging — it seems pretty likely that China will be able to get more bang for their buck in the near future than they can now.

Thirdly, as a result of the Opium Wars, the governing class in China hold a grudge against Britain. A shared future — with China as an investor in Britain — would undoubtedly go a long way to heal some wounds.

And China, I should add, do infrastructure quite unlike anyone else:

While America and the West have shifted their economies toward endless consumerism, tourism and globalisation China has been busy building herself into the greatest industrial powerhouse in world history. Infrastructure undoubtedly plays a huge role in that.

So it largely seems like a good idea. But there’s still a long way to go before we can truly say China is an investor in Britain. Until then, Britain needs to be the leading investor in British infrastructure.