Is Warren Buffett shooting himself in the head? There’s one issue (okay — a couple of issues) I have been silent on in the past few weeks. But on Bank of America, it’s time to break the silence — because the issue of bank failures and bailouts can have huge, violent ramifications. So let’s look at Bank of America’s credit default swap spreads: 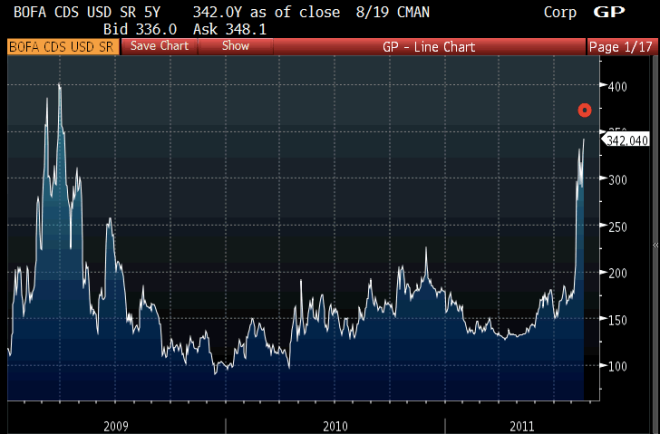 The red dot is where we leaped to just before Warren Buffett — the so-called Oracle of Omaha —  piled $5 billion into less than 24 hours after an Archimedean bathtub epiphany. I hope he did his due diligence:

“The Investor acknowledges that it has had an opportunity to conduct such review and analysis of the business, assets, condition, operations and prospects of the Company and its subsidiaries, including an opportunity to ask such questions of management (for which it has received such answers) and to review such information maintained by the Company, in each case as the Investor considers sufficient for the purpose of making the Purchase. The Investor further acknowledges that it has had such an opportunity to consult with its own counsel, financial and tax advisers and other professional advisers as it believes is sufficient for purposes of the Purchase. For purposes of this Agreement, the term “Transaction Documents” refers collectively to this Agreement, the Warrant and the Registration Rights Agreement, in each case, as amended, modified or supplemented from time to time in accordance with their respective terms.”

Of course, if Warren Buffet wants to throw billions of dollars at an institution which may or may not be sitting on a powder-keg of bad debt, then that is his prerogative. The problems begin when said Oracle’s new investments tank, are declared “too big to fail”, and are propped-up by the taxpayer. And it just so happens that there is an historical precedent for this. From Seeking Alpha:

As a former NLO dividend watchlist stock, Bank of America (BAC) has fallen on hard times that in many respects were predestined. In a posting titled Financial Panic Chronicles dated May 9, 2009, we pointed out the similarities of the October 1929 forced merger between Austria’s number-two bank BodenKreditAnstalt with number-one ranked CreditAnastalt, and the forced mergers between Bank of America/Merrill Lynch, Wells Fargo/Wachovia, and J.P. Morgan/Bear Stearns in 2008.

Our point of making the comparison between distinctly different institutions in different eras was to show what the hazards might be when an ailing bank isn’t allowed to fail. It was only two years after the merger of BodenKreditAnstalt with CreditAnstalt that the remaining “super bank”, CreditAnstalt, collapsed which resulted in the worldwide banking crisis.

The failure of CreditAnstalt in 1931 did not arrive without a fight. F.M. Rothschild committed enormous amounts of money from 1930 to 1931 in an effort to use his name and financial largess to sway public opinion of the health of CreditAnstalt, not unlike Warren Buffett’s most recent investment in Bank of America. Buffett’s announcement that he’ll invest up to $5 billion may be a significant win for the Oracle of Omaha, and has temporarily boosted the share price of Bank of America by nearly 13%. However, even the biggest money interests cannot forestall the inevitable consequence of forced mergers if hobbled banking institutions.

The culmination for CreditAnstalt was nationalisation. Will it be the same for Bank of America?