Anders Aslund of the Peterson Institute is fairly certain that austerity during depressions works:

After five years of financial crisis, the European record is in: Northern Europe is sound, thanks to austerity, while southern Europe is hurting because of half- hearted austerity or, worse, fiscal stimulus. The predominant Keynesian thinking has been tested, and it has failed spectacularly.

The starkest contrasts are Latvia and Greece, two small countries hit the worst by the crisis. They have pursued different policies, Latvia strict austerity, and Greece late and limited austerity. Latvia saw a sharp gross domestic product decline of 24 percent for two years, which was caused by an almost complete liquidity freeze in 2008. This necessitated the austerity that followed.

Yet Latvia’s economy grew by 5.5 percent in 2011, and in 2012 it probably expanded by 5.3 percent, the highest growth in Europe, with a budget deficit of only 1.5 percent of GDP. Meanwhile, Greece will suffer from at least seven meager years, having endured five years of recession already. So far, its GDP has fallen by 18 percent. In 2008 and 2009, the financial crisis actually looked far worse in Latvia than Greece, but then they chose opposite policies. The lessons are clear.

The notion that Latvia is somehow a success story is just absurd.  Latvia has shed some ten percent of its workforce during the economic turmoil — that would be like more than 20 million people emigrating out of the USA, or 4 million people emigrating from Britain. This is why the unemployment rate has fallen somewhat.  And Latvia’s economy is still deeply depressed, far, far below its pre-crisis peak. Would we be calling Britain and America success stories if millions and millions of people were leaving and output was still far, far, far below its pre-crisis peak?

This video from last year shreds the notion of Latvia as some kind of austerity-driven paradise:

The truth is that the binary choice between stimulus and austerity is false. The real decision is how best to produce productivity, creativity, entrepreneurship and growth. It is possible to do this without any debt-fuelled stimulus, and without any immediate fiscal contraction, by (for example) attracting more foreign investment, using bailed-out banks to provide business finance to the unemployed, and deregulating small businesses and entrepreneurs.

The fiscal trick is in learning to cut spending during the boom — something which very few governments have ever mastered, but which is necessary for long-term fiscal sustainability. In the United States during the mid-2000s, tax revenues were high, and growth was moderately strong. This gave the Bush administration a false sense of leeway that allowed them to embark on massive debt-fuelled spending at precisely the wrong time, starting two wars, and creating large-scale domestic spending programs like Medicare Part D and No Child Left Behind. If the Bush administration had cut spending during the boom, not only would it have offset some of the potential for bubbles in housing and stocks, but it would have left the American government in a much stronger financial position come the downturn.

Yesterday’s prosperity didn’t last forever (leaving us with collapsed tax revenues, and massive budget deficits) and today’s depression doesn’t have to last forever either, so long as we have the courage to create the environment for small business and entrepreneurs to thrive, and then to cut, cut, cut during the next boom. Trying to balance the budget in the way Anders Aslund seems to endorse is a road to deeper depression, extreme unemployment, and potentially to millions and millions of people leaving to look for work elsewhere. 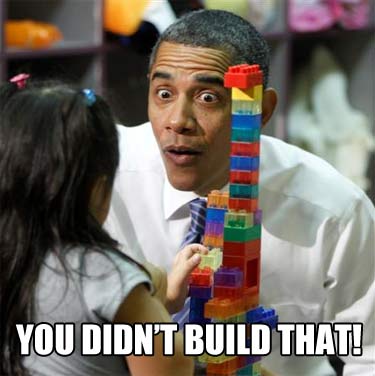 If you were successful, somebody along the line gave you some help. There was a great teacher somewhere in your life. Somebody helped to create this unbelievable American system that we have that allowed you to thrive. Somebody invested in roads and bridges. If you’ve got a business–you didn’t build that. Somebody else made that happen. The internet didn’t get invented on its own. Government research created the internet so that all the companies could make money off the internet.

Much of the blogosphere has defended Obama’s statement, along one of two lines:

Both of these arguments are nonsensical.

Economic and business growth is a complex and multi-dimensional thing, driven by the complex relationship between both supply and demand. To claim that those who put the legwork into building a business — whether that is the owners, or workers — “didn’t build” the business is totally false and absurd.

And even if Obama was talking about infrastructure and the wider economic system (which I suspect was the case) it is taxpayers who fund infrastructure creation, and the overwhelming majority of businesses and business owners (other than the bailed-out financial institutions and similar) contribute heavily to tax revenue.

Whichever way we look at it tax-paying business owners past and present — particularly small businesses, who create far more jobs than their larger corporate counter-parts — built not only their businesses, but also contributed to and funded the wider economic system and the institutions of the state.

Obama and his speechwriters ought to look more carefully at the country they desire to be elected to lead. Obama’s comments are hostile to the moral and intellectual foundations on which America has been built — the celebrated ideals of individualism and the self-made man.

As the former slave and abolitionist Frederick Douglass noted:

Self-made men are the men who, under peculiar difficulties and without the ordinary helps of favouring circumstances, have attained knowledge, usefulness, power and position and have learned from themselves the best uses to which life can be put in this world, and in the exercises of these uses to build up worthy character. In fact they are the men who are not brought up but who are obliged to come up, not only without the voluntary assistance or friendly co-operation of society, but often in open and derisive defiance of all the efforts of society and the tendency of circumstances to repress, retard and keep them down.

I wish we had a Republican Presidential candidate who acted in the spirit of Douglass.

Although Romney will outwardly claim to subscribe to Douglass’ values, his record suggests otherwise. The 2012 Presidential election is between two architects of socialised healthcare, two defenders of government bailouts, two advocates of pre-emptive warfare and indefinite detention without trial.

America, I think, still has a free spirit — although less than she once did. Yet Americans have been browbeaten by two political parties who are largely hostile to the old American ideals of individual liberty, individual responsibility, nonconformism and the frontier spirit.

Yet I am an individualist. If we as individuals are willing to accept the erosion of our liberty, we have only ourselves to blame.

The most annoying thing about the establishment’s ongoing obsession with maintaining the status quo, and supporting and bailing out older and larger companies?

Research funded by the Kauffman Foundation shows that between 1980 and 2005 all net new private-sector jobs in America were created by companies less than five years old. “Big firms destroy jobs to become more productive. Small firms need people to find opportunities to scale. That is why they create jobs,” says Carl Schramm, the foundation’s president.

And it doesn’t stop there.