The so-called recovery is built on sand, and as stock markets climb and climb, and more traders and investors turn bullish, we come ever-closer to a new 2008-style collapse.

Markets have already gone far, far higher than many expected on a drift of reinflationary central bank liquidity. Yesterday the DJIA hit a new post-2007 high: 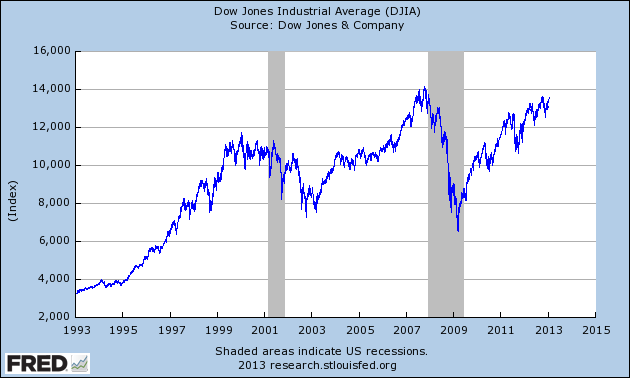 The same day, it was revealed that the big Wall Street banks are gambling again with billions and billions of dollars of clients’ funds. Goldman Sachs are back to pre-crisis-style profits. Again and again — from the LIBOR scandal, to MF Global, to the London Whale, to Kweku Adoboli — the financial sector has illustrated that it has learned very little from 2008, and is still practising many of the same hyper-fragile ponzi finance practices that led to the subprime bubble and the 2008 collapse.

We’ve been here before. Isn’t repeating the same behaviour and hoping for different results the very definition of insanity?

I don’t know exactly how the next crash will occur — although there are many potential ignition spots including a severe trade or energy shock, or a Chinese real estate and subprime meltdown, or a natural disaster, or a new Western financial crisis.  I don’t know when the next crash will occur, or how high the markets will climb before it does (DJIA 36,000 maybe? That would be hilarious).

But I know that if markets and regulators continue to repeat the mistakes that led to 2008, we will be back in a similar or worse hole soon.