I have talked at length before about the dangers of a U.S.-China trade war. 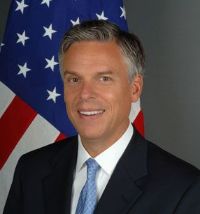 The Shanghai-based Shanghai Media Group (SMG) publication, China Business News: “The United States provoked a trade war again by imposing high anti-dumping duties on Chinese-made gift boxes and packaging ribbon.  This once again shows that 2010 is off to a difficult start for Sino-U.S. relations.  It also reflects that, because of the mid-term elections, Obama is eager to prove to the American voters that the U.S. Administration’s China policy is tough so as to restore his declining support rate. Yao Jian, the Ministry of Commerce spokesperson, issued a statement on February 1, saying that following the financial crisis American trade protectionism has risen.  China has become the biggest victim of the U.S.’s abusive implementation of trade remedy measures.

b. “The United States no longer sits still; it frequently uses evil tricks to force China to buy U.S. bonds”

The Shanghai-based Shanghai Media Group (SMG) publication, China Business News: “This time the quick change of the U.S. policy (toward China) has surprised quite a few people.  The U.S. has almost used all deterring means, besides military means, against China.  China must be clear on discovering what the U.S. goals are behind its tough stances against China.  In fact, a fierce competition between the currencies of big countries has just started.  A crucial move for the U.S. is to shift its crisis to other countries – by coercing China to buy U.S. treasury bonds with foreign exchange reserves and doing everything possible to prevent China’s foreign reserve from buying gold.

If we [China] use all of our foreign exchange reserves to buy U.S. Treasury bonds, then when someday the U.S. Federal Reserve suddenly announces that the original ten old U.S. dollars are now worth only one new U.S. dollar, and the new U.S. dollar is pegged to the gold – we will be dumbfounded.

Today when the United States is determined to beggar thy neighbor, shifting its crisis to China, the Chinese must be very clear what the key to victory is.  It is by no means to use new foreign exchange reserves to buy U.S. Treasury bonds.  The issues of Taiwan, Tibet, Xinjiang, trade and so on are all false tricks, while forcing China to buy U.S. bonds is the U.S.’s real intention.”

And considering that using military means to force China to continue to reinvest in treasuries is completely pointless it seems like America’s free lunch will soon be coming to an end. Most interestingly of all:

The nature of such behavior is a rogue lawyer’s behavior of ‘ripping off both sides’: taking advantage of cross-strait divergences, blackmailing the Taiwan people’s wealth by selling arms to Taiwan, and meanwhile coercing China to buy U.S. treasury bonds with foreign exchange reserves and extorting wealth from the mainland’s people.

No doubt, America’s divide-and-conquer tactics have been highly successful, and highly advantageous to America. The real question, of course, is how long will it be ’til both the Chinese and Taiwanese governments tire of sending their productive capital to America (either for treasuries, or weapons) so that Americans can have a free lunch? A dollar devaluation? War on the Korean peninsula? QE3? QE4? QE Gold?

As I have stated before, China has no reason to be belligerent to America, or to accelerate the death of the dollar as the global reserve currency. Firstly, this is because the current world order is strengthening China, and weakening America. Second, this is because China has accumulated a huge swathe of American debt, and wants to use it to acquire American (and global) productive assets and wealth.

America on the other hand, as the declining power, has every reason to be belligerent to China.

An new book, discussed in this week’s Economics focus, by Arvind Subramanian of the Peterson Institute for International Economics argues that China’s economic might will overshadow America’s sooner than people think. Mr Subramanian combines each country’s share of world GDP, trade and foreign investment into an index of economic “dominance”. By 2030 China’s share of global economic power will match America’s in the 1970s and Britain’s a century before. Three forces will dictate China’s rise, Mr Subramanian argues: demography, convergence and “gravity”. Since China has over four times America’s population, it only has to produce a quarter of America’s output per head to exceed America’s total output. Indeed, Mr Subramanian thinks China is already the world’s biggest economy, when due account is taken of the low prices charged for many local Chinese goods and services outside its cities. China will be equally dominant in trade, accounting for twice America’s share of imports and exports. That projection relies on the “gravity” model of trade, which assumes that commerce between countries depends on their economic weight and the distance between them.

So should it come as no surprise that America continues to arm and train China’s enemies.

China’s top official newspaper warned on Friday that “madmen” on Capitol Hill who want the United States to sell advanced weapons to Taiwan were playing with fire and could pay a “disastrous price,” as the Obama administration nears a decision on a sale.

The People’s Daily, the main paper of China’s ruling Communist Party, said the United States should excise the “cancer” of the law which authorizes Washington’s sale of weapons to the self-ruled island of Taiwan that China considers its own territory.

Taiwan’s biggest ally and arms supplier, the United States is committed under a 1979 law to supply it with the weapons it needs to maintain a “sufficient self-defense capability.”

Is America making a mistake? Should they instead be looking to integrate with the rest of the world, so that the necessity of a shared future means that war, threats and belligerence are in nobody’s interest?