Today we seem to have an answer.

As Anatole Kaletsky sarcastically put it:

That’s right — aside from an underfunded infrastructure pledge, a duty cut on beer and cigarettes, and a tiny and delayed corporation tax and national insurance decrease, George Osborne’s plan is to throw money at housing and hope for the best.

Sounds markedly similar to the American strategy following 2001 when Greenspan “created a housing bubble to replace the NASDAQ bubble”, and we all know how that ended.

I’d tend to argue that the opposite is a much better idea. Instead of propping up the housing market, Cameron and Osborne should deregulate construction and planning (getting planning permission can be a long, costly task in the UK, and planning restrictions are estimated to add up to £40,000 to house prices) so that housing prices fall (if not absolutely at least priced in median wages) and Generation Y can start getting on the housing ladder.

As Faisal Islam put it:

Radical idea: Why not let house prices fall a little, and help clear the market? Is that not capitalism? #Budget2013

But alas no. Instead of using the ultra-low interest rate environment and idle resources to invest in a quality business infrastructure  — high speed broadband, roads, railways, energy — and lower unemployment, Osborne has chosen to throw his stock in with the malinvestment-loving property speculators.

Unfortunately, pumping up credit bubbles can win elections (as we saw with Bush in 2004), so this may have improved the Tory electoral chances for 2015. But in the long run, we will see this as a dire move.

Britain has returned to growth:

But compared even to the USA — which has huge problems of its own — Britain is still mired in the depths of a depression: 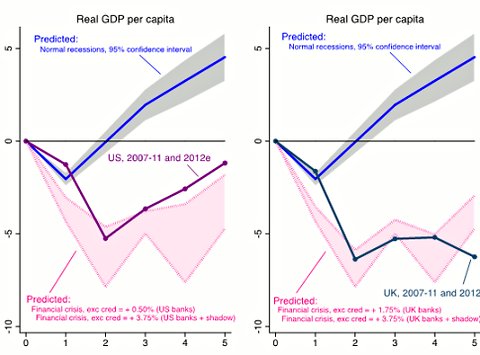 An Olympic bounce does not constitute a recovery. As I noted in March, Britain is under-performing the United States — in GDP and in unemployment. Although Cameron and Osborne keep claiming that they are deficit hawks who want to cut the government deficit, the debt keeps climbing.

Defenders of Cameron’s policies might claim that we are going through a necessary structural adjustment, and that lowered GDP and elevated unemployment is necessary for a time. I agree that a structural adjustment was necessary after the financial crisis of 2008, but I see little evidence of such a thing. The over-leveraged and corrupt financial sector is still dominated by the same large players as it was before. True, many unsustainable high street firms have gone out of business, but the most unsustainable firms that had  to be bailed out — the banks and financial firms who have caused the financial crisis — have avoided liquidation. The real story here is not a structural adjustment but the slow bleeding out of the welfare state via deep and reaching cuts.

Britain has become welfare-dependent. Britain’s welfare expenditure is now over 25% of its total GDP. Multi-billion pound cuts in that figure are going to (and have) hurt GDP.

I believe countries are better with small governments and a larger private sector. The private sector consists of many, many individuals acting out their subjective economic preferences. This dynamic is largely experimental; businesses come and go, survive, thrive and die based upon their ability to stay liquid and retain a market, and this competition for demand forces innovation. The government sector is centrally directed. Governments do not have to behave like a business, they do not have to innovate or compete, as they have the power to tax and compel. (The exception to this is when governments become overrun by the representatives of private industries and corporations, who then leverage the machinations of the state to benefit corporations. When this occurs and markets become rigged in the favour of certain well-connected competitors, it matters little whether we call such industries “private sector” or “public sector”).

So I am sympathetic to the idea that Britain ought to have a smaller welfare state, and fewer transfer payments than it presently does. But the current and historical data shows very clearly that now is not the time to make such an adjustment. The time to reduce the size of the welfare state is when the economy is booming. This is the time that there is work for welfare claimants to go to. Cutting into a depressed economy might create a strong incentive for the jobless to work, but if there is little or no job creation for the jobless to go to, then what use are cuts? To reduce government deficits? If that’s the case, then why are British government deficits rising even though spending is being reduced? (The answer, of course, is falling tax revenues).

An alternative policy that would reduce unemployment and raise GDP without increasing the size of government is to force bailed-out banks sitting on huge hoards of cash to offer loans to the jobless to start their own private businesses. The money would be transferred to those who could be out working and creating wealth, but who cannot get credit through conventional channels, unlike the too-big-to-fail megabanks who are flush with credit but refuse to increase lending to the wider public. Even if the majority of these businesses were to fail, this would ensure a large boost in spending and incomes in the short run, and the few new businesses that succeed would provide employment and tax revenues for years to come. Once there is a real recovery and solid growth in GDP and in unemployment, then the government can act to decrease its size and slash its debt. Indeed, with growing tax revenues it is probable we would find that the deficit would end up decreasing itself.

Above 80% of Greeks want to stay in the Euro:

About 80.9 percent of Greeks believe Greece should struggle to stay within the eurozone “at any cost,” fresh opinion polls showed on Wednesday.

Some 45.4 percent of respondents in a survey conducted by GPO firm for local private television Mega channel said that they regarded as most probable a Greek exit from the European common currency. And 48.4 percent of the respondents said that such a prospect was less likely.

But they don’t like the austerity measures that staying in the Euro entails:

About 77.8 percent expect the next government to emerge from the June 17 general elections to renegotiate the harsh austerity terms of the two bailout deals reached since May 2010 with international lenders to avoid a disorderly default

So the question is why don’t they leave Greece and move to the core where companies are hiring and public services aren’t being slashed, and where there is no overhanging threat of being thrown out of the euro?

Greeks claim that that’s exactly what they want to do:

Conducted in January by the Focus Bari company using a sample of 444 people aged between 18 and 24, the study shows 76% of interviewees believing that leaving Greece would be the best response to the effects of the economic crisis.

But they’re not doing it:

However, for most of them, the idea of leaving appears a dream that cannot come true. Half of those interviewed (53%) spoke of having thought about emigrating, while just 17% said that they had resolved to leave the country and that they had already undertaken preparatory actions.

A slightly lower percentage (14%) stated that they were forcing themselves quite consciously to stay in Greece, as it is their generation that has to bring about the changes that the country so desperately needs.

And it’s not even like they have to return home should recent immigrants become jobless — after twelve months working in another European state, Europeans are generally entitled to welfare:

Who can claim benefits in the European Economic Area (EEA)?

You may be able to get benefits and other financial support if any of the following apply:

Yet this isn’t just a Greek issue. Labour mobility is much lower in Europe than the US: 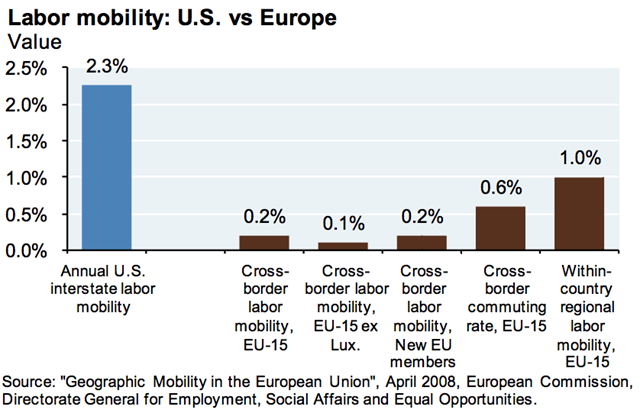 The fact that labour mobility is low in Europe is indicative of a fundamental problem. In any currency union or integrated economy it is necessary that there is enough mobility that people can emigrate from places where there is excess labour (the periphery) to places where labour is in short supply.

Now, there is free movement in Europe, which is an essential prerequisite to a currency union. But the people themselves don’t seem to care for utilising it.

Why? I can theorise a few potential reasons people wouldn’t want to move — displacement from friends and family, moving costs, local attachment.  Yet none of those reasons are inapplicable to the United States. However there are two reasons which do not apply in the United States — language barriers and national loyalty. It is those reasons, I would suggest, that are preventing Europe from really functioning as a single economy with a higher rate of labour mobility.

The people who built the Euro realised that such problems existed, but decided to adopt a cross-that-bridge-when-we-come-to-it approach:

But long-term and deep-seated issues like language barriers and nationalistic sentiment cannot simply be eroded away in a day with an economic policy instrument. No bond-buying bazooka can smooth the underlying reality that Europe — unlike the United States — is not a single country.

Greeks who want to stay in the euro in the long run would do well to move to the core.

This is nuts. UK banks want to charge customers for the privilege of handing over their money and letting banks gamble it in the global derivatives casino.

A groundswell of support for change is understood to be gathering among the authorities. The Treasury’s advisers on the Independent Commission on Banking and the Office of Fair Trading are said to be also backing the proposals, alongside the treasury select committee and financial regulators.

Britain is the only country in Europe to operate a “free-in-credit” model of current account banking. Instead of levying fees on an account, lenders make their money through “stealth charges” on overdrafts and cross-selling of other products. Only India and Australia run equivalent models.

Regulators and officials want to reform the system to boost competition by making it easier to compare rival accounts. They also believe so-called “free banking” encourages mis-selling of financial products, exposes banks to compensation risks and lets customers down.

So the impression that bankers and regulators have seems to be that banks are doing customers a favour by holding onto their money and occasionally losing it all buying junk securities.

Unfortunately this isn’t a free market, and banks can (and probably will) co-ordinate with each other to keep the market uncompetitive. Barriers to entry make it difficult to impossible for new players to enter the market and dislodge the status quo.

As the Office of Fair Trading noted in their must-read 2010 report:

New entrants to the retail banking sector face significant challenges in attracting customers and expanding their market shares, an OFT review has found.

The review of barriers to entry, expansion and exit in retail banking, published today, was launched in May 2010 to identify any obstacles blocking firms from entering the sector or from successfully competing against existing firms, as well as factors preventing inefficient firms from exiting the market and being replaced by more efficient ones.

Anyway, I know what I will do with my money if my bank insists on charging me for the privilege of gambling my money: close my account, and find a bank that won’t charge. Even given the current barriers to entry, the opportunity to undercut the bigger players will be too good an opportunity to miss. And I’m sure lots of other people will do the same. Given that some parts of the UK banking industry (especially the Spanish-owned parts, and especially Banco Santander) are already looking shaky, does the UK banking industry really want customers pulling their money en mass?