The world economy should brace itself for a slowing of stimulus by the Federal Reserve if history is any guide.

Personally, I think this is nutty stuff. In enacting QE3, Bernanke made pretty explicit he was targeting the unemployment rate; the “full-employment” side of the Fed’s dual mandate. And how’s that doing? 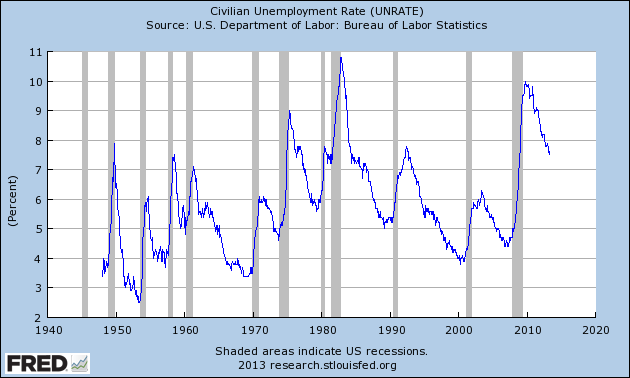 It looks like its coming down — although, we are still a very long way from full employment. And a lot of that decrease, as the civilian employment-population ratio insinuates, is due to discouraged workers dropping out of the labour force:

Moreover, of course, quantitative easing — substituting zero-yielding cash into the money supply for low-yielding assets — is about the Federal Reserve attempting to reinflate the shrunken money supply resulting from the collapse of shadow intermediation in 2008. And the broad money supply remains extremely shrunken, even after all the QE:

And the bigger story is that America is still stuck in a huge private deleveraging phase, burdened with a humungous debt load:

Japan, of course, tapered its stimuli multiple times at the faintest whiff of recovery. Bernanke and Yellen will be aware of this.

Much more likely than abandoning stimulus is the conclusion by the next Fed chair — probably Yellen — that the current transmission mechanisms are ineffective, and the adoption of more direct monetary policy, including helicopter money.